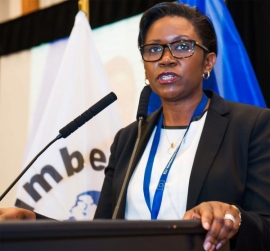 World Diamond Council (WDC) executive director Marie-Chantal Kaninda bid farewell - or rather, au revoir - to the organization after more than two years spent leading it. "I certainly do not do so from a place of disillusionment or disappointment," she writes, "but simply because new opportunity has presented itself, and at this stage of my career I feel that I must seize it."

Only a few months ago, Kaninda was identified by Forbes Afrique as one of Africa’s 100 most influential women. A native of the Democratic Republic of the Congo (DRC), Kaninda has served as WDC executive director since March 2017. Prior to joining the WDC, she was the chief adviser for external affairs, Africa, for Rio Tinto from 2012 to 2016. She has also held external affairs roles at De Beers and AngloGold. "To many, the WDC was regarded a bastion of the industry establishment, with its focus predominantly on protecting the integrity of the diamond in the consumer markets. I came to the job with a good deal of experience in the diamond and extraction industries, but clearly as an African woman who had spent most of her professional life serving the interests of miners and mining communities in the continent where I reside." She adds, "I was and I remain convinced about the opportunities for the better future diamond resources can provide to such individuals and communities, who often live in abject poverty."

Her statement continues, "[The World Diamond Council] represents both the upstream and downstream interests of the diamond industry, where the well-being and future of all miners and their dependents in the producing countries are inexorably linked to the integrity of diamonds and diamond jewelry in the markets where they are sold.... [W]herever life finds me, I will remain an advocate of the wonderful people who mine, process and trade diamonds. When it mattered, you stepped up and declared that the industry can do more to ensure a better life for all who depend on it. Like the gemstone itself, this is indeed a rare quality.”