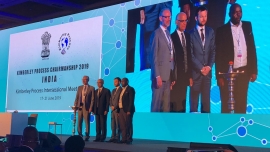 The Kimberley Process Intersessional Meeting 2019 opened in Mumbai yesterday as the organization tasked with eliminating conflict diamonds approaches what may be considered a critical junction: will it stay the course or take a leap forward?

Shri Alok Vardhan Chaturvedi, KP Chair (India) and Director General of Foreign Trade opened the gathering by praising the KP's accomplishments and welcoming the adoption of the resolution by the UN General Assembly last March, which calls for strengthening the KP to more effectively sever the link between the illicit transaction of diamonds and conflict. "India, as KP Chair, would continue to work with the governments, the international diamond industry and civil society towards building consensus and strengthening the KP," said Chaturvedi. Outlining the agenda, he said the meeting will help in "creating a clear & concise Core Document, enhancing KP standards and modalities with the peer review mechanism; raising the level of representation and participation; and improving the gathering and flow of essential data amongst other key goals." This includes establishing a permanent secretariat and a multi-donor fund that will ensure all participants are capable of being fully active within the KP.

The big question facing the KP, however, concerns trade-reform issues, specifically expanding the definition of a conflict diamond. Representing the diamond industry, the president of the World Diamond Council, Stephane Fischler, spoke of the enormous economic and social opportunity presented by diamonds and highlighted the dramatic disparity between the development trajectory of countries which were able to exploit that potential and of those which suffered due to civil war and conflict. "The Kimberley Process today has an opportunity to make a difference in those countries where the diamond industry has not yet met its developmental potential," Fischler said. "By providing ourselves with the means to prevent grave and systemic violence and establishing permanent structures that will be able to channel assistance to all those in need, we can meet the commitment we made last year in Brussels: This is not only about a review, but also reform." He exhorted representatives of member countries to have the courage to speak up in favor of requisite steps to stem the flow of conflict diamonds and concluded by saying, “It is now in your hands."

Shamiso Mtisi, coordinator of the KP Civil Society Coalition, said that diamonds have the potential to be a positive driver of development, but that it can be achieved only under the right conditions. He also called for an expanded scope of the KP, saying that innovative tools can be adopted by the KP to deal with situations of violence. Where diamonds involve violence, he said, it affects sustainability, noting that the KP is the last chance to set things on the right course ... but that 'last chance' seems to be approaching very quickly.