On The Environmental & Social Impact of Mined vs. Synthetic Diamonds 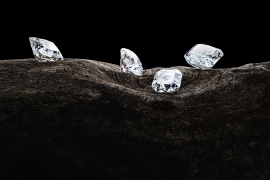 The marketing battle between the natural diamond industry and laboratory-grown diamond producers and their advocates is intensifying. Not a week goes by without the latest effusive article - sponsored or otherwise - appearing about the inevitable rise of synthetics. While the traditional issue of the undisclosed mixing of synthetics with natural is still very topical, recent debates have shifted to nomenclature, pricing, transparency and corporate social responsibility. Giselle Saati, in an article published in the February issue of Jewellery Business, pulls the research together and examines whether the environmental and ethical claims of synthetics producers match the data. Leading synthetics producers market their diamonds as being conflict-free and environmentally friendly - often demonizing the natural industry in the process - while the natural industry promotes the fact that it has nearly eliminated conflict diamonds, delivers social benefits and its product is intrinsically valuable and rare.

Comparing the data, however, proved difficult: not only are there different types of natural and synthetic diamond production and a variety of locations where it is performed, each of which has a different impact on its environmental score, there is also the problem of information asymmetry. Whether its figures are entirely accurate or not, the diamond mining industry is regulated and often employs third-party agencies to monitor environmental and social impacts, whereas lab-grown producers have little supervision, are privately owned and are under no obligation to disclose information. As Saati writes, "transparency is a concern." And, as Avi Krawitz recently noted in his thoughtful article "Synthetics: The Meat of the Matter", "To ensure sustainable growth, synthetics suppliers need to show that their competitive edge extends beyond badmouthing natural diamonds - particularly since the claim that a lab-grown diamond is eco-friendly, transparent and ethically sourced tends to be vague." Indeed, with so little information available about how many carats of synthetics are being produced, the raw materials used and where they are produced (few American producers mention the billions of carats being grown in China and elsewhere), the claim rings hollow.

Nonetheless, as Saati writes, "Although lab-grown diamond producers do not share their greenhouse gasses emissions, it is highly unlikely that they are contributing the same amount as diamond mining companies," adding, "Unfortunately, without sufficient evidence, it is very difficult to establish an actual carbon footprint." Science does not end where marketing begins, though it would appear that way. In terms of water use, it cannot be denied that gem-quality lab-grown diamond producers consume considerably less water than mining companies. Saati also concludes, "there is no question 'team lab-grown' wins the land conservation and biodiversity category," though she does mention in passing the often extensive efforts mining companies make to restore (remediate) the land and ecosystems where they operate, and their contributions to local communities.

Finally, Saati takes a look at the social impact of the two types of diamond production where again, little information from synthetics producers is available. Where one falls on the issue of conflict diamonds will depend on what one believes about the Kimberley Process' claim that 99.8% of the world's diamonds are conflict-free. There is little reason to doubt this claim, but it is the view of the World Diamond Council, the AWDC and several prominent NGOs that the definition of a conflict diamond is too narrow. There is room for improvement on this count.

Saati notes that the social implications of diamond mining vary across geographic regions and are closely interlinked with government laws and regulations, yet it is clear from the two cases she looks at - Botswana and Canada - that diamond mining generates much-needed revenue. In Botswana, a peaceful, democratic country of middle income, GDP has grown nearly 6% annually for the last 50 years, with Debswana - a 50/50 joint venture between the government and De Beers - generating $4 billion of value to the economy in 2014, approximately 25% of its GDP. In Canada, "Gahcho Kué, which opened in 2016, is said to have already brought $440 million to the Northwest Territories economy." Mining companies create thousands of jobs around the world, support First Nations communities in Canada, indigenous communities in Russia and the local populations in Africa and elsewhere. Lab-grown diamond producing companies are not contributing to the economy on the same scale.

Lab-grown gem-quality diamond producers pose less of a threat to the environment than mining companies, as they use less freshwater, emit fewer greenhouse gasses and do not disrupt the land. However, they do not contribute to the economy and society as much as mining companies, and the issue of transparency still needs to be addressed. Mining has made important contributions to economic growth, GDP, infrastructure development and job creation worldwide. In other words, when it comes to evaluating the environmental and social impact of diamond mining, there is a trade-off between the economic and social benefits and the environmental costs.