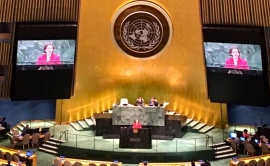 United Nations General Assembly (UNGA) on March 1 adopted a resolution calling for a strengthening of the Kimberley Process (KP) to more effectively sever the link between the illicit transaction of rough diamonds and armed conflict, thereby contributing to the maintenance of international peace and, in particular, security and sustainable development in artisanal diamond-mining regions. The World Diamond Council has welcomed the adoption of a resolution, which was proposed by the European Union (EU) and ratified by consensus by the members of the 193-member UNGA body.

“We are most heartened by the adoption of the resolution by the UNGA, not only because it echoes the call for reform that we advocated together with civil society at the most recent KP Plenary Meeting in Brussels, but also because it was passed with the support of all United Nations member countries, including those in whose territories diamonds are mined, processed, traded and sold in jewelry,” said WDC President Stephane Fischler. “We strongly hope that this across-the-board commitment to the continuous improvement in the integrity of the global rough diamond supply chain by all these nations will be repeated in the KP forum over the course of this year.”

The resolution passed during the UNGA’s 73rd Session expressly referenced discussions taking place in the KP’s Ad Hoc Committee on Review and Reform, which is examining proposals supported by the WDC. Among these are the strengthening of the KP’s peer review mechanism, the establishment of a permanent KP Secretariat, and the broadening of the scope of the Kimberley Process, which the WDC and civil society have insisted requires the expansion of the definition of “conflict diamonds,” to include all forms of systemic violence in the diamond-mining areas. Mr. Fischler emphasized the inexorable link the UNGA resolution made between the conflict-prevention role of the KP and the UN’s 2030 Agenda for Sustainable Development and the Sustainable Development Goals. “It underscored our deeply-held belief that the KP’s role is not only defensive, but it is also proactive, in that it is a catalyst for creating societies with sustainable economic opportunities, where benefits are shared by all stakeholders, regardless of race or gender,” he stated.

"By eliminating the destabilizing factors that inherently exist in places plagued by systemic violence," he added, "a strengthened Kimberley Process will be a critical element in ensuring that similar contributions can take place in countries where artisanal mining is dominant. The diamond industry’s capacity to serve as a nation builder must come to be considered an integral part of the diamond’s value proposition,” Mr. Fischler said.