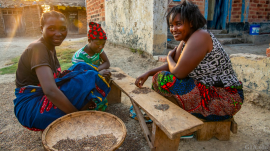 The GIA (Gemological Institute of America) has developed an illustrated booklet, “Selecting Gem Rough: A Guide for Artisanal Miners,” to help small-scale miners learn more about the quality and classification of the gems they recover, and ultimately to obtain greater market value. As Russel Shor explains, the two pilot projects GIA initiated with Pact, a Washington, D.C.-based non-governmental development organization with offices in Tanzania, are having an impact on these miners' lives.

Shor writes, "Artisanal small-scale (ASM) miners, working in small teams using only hand tools, mine many of the colored gemstones from Tanzania and other areas around the world. They often live and work in remote areas where there are few other opportunities to earn a living and have little or no access to information about the stones they recover. Having even simple information about gem quality and an understanding of market needs puts them in a stronger position to negotiate with buyers." The GIA Guide, a photo-rich booklet written in Swahili with photos of the rough gemstones found in East Africa, including tourmaline, corundum, various types of garnet, topaz, spinel, zircon and tanzanite, provides them with the basic information they need to evaluate the quality of the rough and have a better understanding of their value on the market.

“[The miners] can sort, they know how to wash and add value into the material … They are really now getting more money than when they didn’t have this project. It has added a lot of value into their life using a book and using a tray,” said Salma Kundi Ernest, secretary general of the Tanzanian Women’s Mining Association (TAWOMA), speaking through an interpreter at the Chicago Responsible Jewelry Conference, held in October 2018. The first pilot trained approximately 400 artisanal small-scale miners in the Tanga region near the northern border of Tanzania. The second pilot distribution reached approximately 750 additional miners in gem-rich regions. The Tanzanian government was informed about each of GIA and Pact’s visits and endorsed their efforts. Norbert Massay from Pact provided travel logistics, government contacts and information about mining localities.

Massay reported that benefits from the gem guide extend far beyond the miners themselves. “I can see how this is changing things here. People have more money, more kids are in school, more of them have school uniforms and people are building brick houses. All of this shows that it is bringing more value into peoples’ lives,” he said. GIA President and CEO, Susan Jacques said, “This is core to the GIA’s mission. We are moving practical gemological knowledge to the beginning of the supply chain for the people who can benefit from it tremendously.”