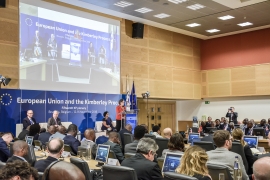 The EU Plenary, which brings together the three pillars of the KP and its many stakeholders, was marked as a unique opportunity to advance the ambitious reform agenda set in 2017. Under the leadership of the EU, the KP discussed an agenda with three priorities: a deepening of the KP, including the reinforcement of the system of controls and the transformation of KP recommendations into minimum requirements; an expansion of the KP by broadening the definition of conflict diamonds; and professionalization of the KP by, among others, the establishment of a permanent KP secretariat.

Opening the Plenary on Monday, November 12, KP Chair Dr. Hardeman said that a “sense of urgency” hung over this year’s meeting, and that the time had come for the KP to deliver on its mandate. “We must all embrace our responsibility,” she said. Belgium’s Deputy Prime Minister and Minister of Foreign and European Affairs Mr. Didier Reynders agreed, saying, “The Kimberley Process has been a successful and effective partnership between nation states, industry and civil society to prevent conflict diamonds from entering the legitimate trade of rough diamonds. But the race is far from run. We need to remain vigilant to sustain and further the progress that has been achieved.”

If the message was not clear enough, World Diamond Council (WDC) President Stéphane Fischler pointed out that over 90% of diamonds are mined by public companies that report to their shareholders on their financial as well as social and environmental performance. “Why can we not do the same for the other 10% coming from artisanal mining communities, and maintain the duty of trust owed to consumers by ensuring these diamonds are ethically sourced as well?” He concluded, saying, “We need to put in more effort and push forward for the current reform process to succeed. By focusing on real and lasting change, based on fairness and justice, with the commitment not only of countries and their leaders, but also international institutions and business investors, we can finally make good on our promises.”

Backing up this commitment, the (WDC) and the Civil Society Coalition (CSC) - both integrated into the KP as Observers - voiced their strong support on the opening day for a proposal put forward by the government of Canada to expand the KP’s official definition of what constitutes conflict diamonds. The proposed change would extend the definition beyond rough stones that finance wars against governments to include rough diamonds associated with other instances of grave, widespread and systematic violence. The WDC also voiced its support for a declaration of general principles for responsibly sourced diamonds proposed by the United States Department of State covering human rights, community development, health and labor standards, environmental impacts, and the combatting of corruption, terrorism and organized crime.

However, as the 2018 KP Plenary Meeting drew to a close last Friday, the World Diamond Council (WDC) expressed concern that more progress was not made in reforming its scope. Nonetheless, the WDC considered as positive the acknowledgement in the KP Plenary’s final communique of the submission by the Canadian government of an expanded definition of conflict diamonds, which had been proposed by WDC and its fellow KP observer, the Civil Society Coalition (CSC). The WDC expressed hope that the Kimberley Process Participants will support the amendment and make further contributions ahead of the next KP Plenary in India in 2019.

Furthermore, the WDC welcomed the decision of the KP Plenary to adopt all three Administrative Decisions proposed by the industry: an agreement in principle to establish a Kimberley Process Secretariat; the decision on the “Compilation of Modifications to Technical Definitions”, which entails that the definition of “Country of Origin” will be replaced by “Country of Mining Origin”, meaning the country where a shipment of rough diamonds has been mined or extracted; and lastly, the “Use of Unified Diamond Nomenclature and Terminology as a Best Practice”, referring to the Diamond Terminology Guidelines (DTG) established by nine leading diamond industry organizations in January of this year. These guidelines include precise terminology when referring to synthetic diamonds by using the terms “synthetic”, “laboratory-grown” or “laboratory-created” as well as several recommendations.

Mr. Fischler; “We remain hopeful that the KP can achieve tangible progress in its commitment towards reform in the future and we urge KP Participants to support efforts in constructive progress in this regard to achieve incremental change. The value of a diamond is enhanced by the positive values that it communicates to the consumer, and we therefore believe that any effort to reinforce those values is worthy of discussion.”

The Kimberley Process Civil Society Coalition in a statement says it regrets the call for reform met “great resistance” from participating states. “The resisting participants will find themselves on the wrong side of history. If not inspired by their obligations to protect human rights of the mining communities in their countries, they should at least respond to the threat of synthetic diamonds to producer country economies, and to consumers’ calls to buy responsibly sourced diamonds. If the KP does not consider the ethical, human rights and environmental impact of mining, then natural diamonds will lose their market and the economies of diamond producing countries will be badly affected,” says Shamiso Mtisi, Chair of the Kimberley Process Civil Society Coalition.

External representatives of the diamond industry also weighed in on the results of the 2018 Plenary. “The KP should implement the necessary reforms in order to remain ‘fit for purpose’, as the current KP Chair likes to say,” says Ari Epstein, CEO, Antwerp World Diamond Centre (AWDC). “The KP is crucial for the industry because it is essentially a ‘license to operate’. Therefore, the AWDC is a proponent of the ambitious reform agenda and made every effort to see it adopted. While the progress we had hoped to see did not come to fruition, we will continue to advocate for incremental advances. The KP needs to reinvent itself to remain effective in the future. It must be able to respond to consumer demands as well as criticisms from NGOs, which carry great weight among Western consumers. These consumers not only demand that diamonds are conflict-free; they also want diamond jewelry to create a positive impact, particularly for communities that depend on the production of rough diamonds.”