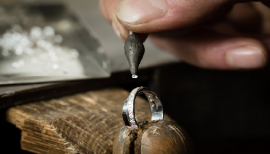 The 2018 World Jewellery Confederation (CIBJO) Congress held last week in Bogotá, Colombia featured a strong focus on responsible sourcing in the jewelry industry. This included the introduction of a Responsible Sourcing Guidance document, which will serve as a reference for responsible sourcing practices developed and applied by industry organizations and commercial bodies worldwide and will come to have the status of a CIBJO Book. To oversee the process, a Responsible Sourcing Commission was established. The CIBJO’s Responsible Sourcing Guidance is based on the OECD Responsible Supply Chains of Minerals from Conflict-Affected and High-Risk Areas, and supports the Kimberley Process and UN Guiding Principles on Human Rights.

“At the end of last year, we decided to investigate whether the methods by which we have compiled our standards for diamonds, colored stones, pearls, precious metals, coral and gemological laboratories could be applied to the subject of responsible sourcing,” explained CIBJO president, Dr. Cavalieri. “We asked ourselves, would it be possible to create a responsible sourcing protocol that could be universally accepted, which would meet the ethical standards that our industry expects from itself, and at the same time be acceptable from the perspective of the international community?” He continued, “Like the other CIBJO Blue Books, the standards and guidelines contained in the Responsible Sourcing Guidance document are recommendations... . However, they should come to serve as benchmarks for responsible sourcing systems developed and applied by industry organizations and commercial bodies worldwide, and for governments that may seek to create viable regulatory systems."

One topic discussed at length was the recently revised guides of the U.S. Federal Trade Commission (FTC) for diamonds, precious metals, colored gemstones and pearls. The CIBJO, along with other industry groups, intends to consult with the FTC about its changes to diamond terminology. The CIBJO decided not to change its Blue Book of standards and nomenclature for the diamond industry in response to the revised guidelines the FTC released in July. At the meeting of the CIBJO Ethics Commission, Tiffany Stevens, President and CEO of the Jewelers Vigilance Committee emphasized that the guides do not have the power of law, though they do attach to a law preventing misleading advertising. In the FTC guides, the word “natural” has been removed from the definition of diamond because it reflects that diamonds can now be made in several ways, however, it does not change the requirement to disclose lab-grown diamonds.

Tyler Gillard, who heads the Responsible Mineral Supply Chain project at the Organisation for Economic Cooperation and Development (OECD) in Paris, said, "CIBJO's new initiative ensures a level playing field and is a common and consistent common reference among different actors in the supply chain." He insisted that the OECD understands the challenges faced by the many smaller and medium-sized bodies in the jewelry industry in instituting its due diligence standards, especially small-scale and artisanal miners. “We don’t require full traceability from mine to consumer, but that you are exhibiting a strong degree of commitment,” he said. "I emphasize that due diligence is a process, and it won't be completed overnight. But you must show good faith that you are doing it."