Russia Makes Bid for 2020 KP Chair & Other News from Intersessional 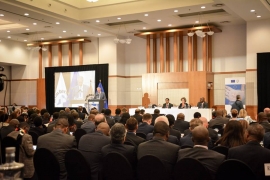 The Kimberley Process Intersessional being held in Antwerp got into full swing this morning, and while the proceedings were calm and orderly - not always a given when the 54 participants (representing 81 countries) get together for their annual meetings - there were some noteworthy highlights. The biggest surprise came from Russia, which threw its hat into the ring by announcing its candidacy for 2019 Vice Chair, and by extension for the 2020 Chairmanship, complete with a slick video produced in support of its candidacy. Deputy Minister of Finance of the Russian Federation Aleksey Vladimirovich Moiseev and ALROSA's Head of International Relations Department Peter Karakchiev led the charge.

Stephane Fischler, President of the World Diamond Council, set a strong tone for the meeting, stating, "We believe it is time to reform and strengthen our process. We believe it is time for alluvial diamond producing countries to use the enormous potential the KP offers to make it work better and more to their advantage. We believe it is time for alluvial diamond producing countries to have finally something to show for after decades of diamond recovery. We have seen the examples of Namibia, Botswana, South-Africa, Lesotho, Angola. Though more and better can be done ... it remains a fact that the export of diamonds have strongly benefited these KP members." Calling for the expansion of KP membership and its mandate, he added, "We must change our priorities. Focusing not first and only on maintaining consumer confidence but also on using this unique process in building capacity and responsibility in providing better lives and a better future to millions. That the priority of our process is to benefit them together with the consumers buying their diamonds."

Chair of the Working Group on Diamond Experts Mark Van Bockstael, who has been an intergral part of the KP since its inception, addressed the ongoing difficulties in Central African Republic, noting that the country was on the agenda at the first meeting of the KP 18 years ago, and still is. "It is very sad to see we have not been able to get CAR off the agenda. I hope we will soon make its troubles a thing of the past." He called on KP participants to avail of the Group of Experts' assistance when importing CAR diamonds, and described their efforts to use the footprint for CAR diamonds to chart the flow of diamonds from CAR. His remarks came a day after Reuters published an article about CAR's struggles to resume its diamond exports despite a partial lifting of a ban on its diamond exports. Mines Minister Leopold Mboli Fatrane told Reuters the country needs more help including training, as the demands of KP administration are holding up shipments for between three and six months, and Van Bockstael addressed specifically the need for increased training and the efforts the KP is making to achieve it.

Meanwhile, Chair of the Working Group on Statistics Carolyn Francis described significant increases in the global rough diamond trade in 2017 across all measures. While the official figures are as yet unpublished, she noted a more than 10% increase in the volume of diamond exports, a value increase approaching 30% and a rise in the average price per carat well into double digits. The number of KP Certifcates issued also increased in 2017 by approximately 14 percent for exports as well as imports.

The highlight of the innovation panel was undoubtedly the explanation by Yves Kerremans of the Scientific and Technological Research Center for Diamonds (WTOCD), the AWDC's research center, about the newly unveiled Fenix fully-automated diamond polishing machine (video). Arguably the most interesting new technology that has flown slightly under the radar is Gübelin Gem Lab's "Paternity Test", developed and used for emeralds but fit for purpose for diamonds as well. As Managing Director Daniel Nyfeler explained, the Paternity Test is a novel technology uses DNA-based nanoparticles, applied directly at the mine on the rough crystals, to prove the provenance of emeralds back to the exact mine. This technology is part of Gübelin's Provenance Proof initiative, developing new technologies to increase transparency and traceability within the gemstone industry. Finally, as Martin Rapaport was fulminating about De Beers destroying transparency in the diamond industry, Head of Government & Industry Relations at De Beers, Feriel Zerouki, confirmed that the company's blockchain-based Tracr platform for securely tracking diamonds across the value chain would be made available for all diamond industry stakeholders.