ALROSA Puts $75 Million Into Environmental Sustainability in 2017, More Planned in 2018 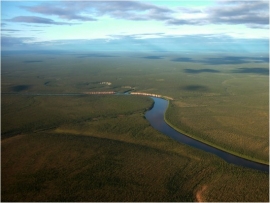 Summing up the main results of its ecological programs and events for 2017, Russia's ALROSA, the largest diamond company in the world, said it allocated $75 million (RUB 4.4 billion) for environmental programs last year alone. These funds allowed the miner to implement projects of great importance to ALROSA and the regions and to significantly increase monitoring over the state of the environment. In 2018 financing for environmental activities will increase up to approximately US$85 million (RUB 5.3 billion).

In particular, last year ALROSA implemented two projects of significance for the company and the region, timed to take place during the Environment Year in Russia. One provides for restoration of sewage treatment facilities in Udachny town. This project is of strategic importance for the fishery region where local rivers require special protection. Restoration of sewage treatment facilities in Udachny allowed additional cleaning of sewage waters from organic pollution to comply with the threshold level values of fisheries water reservoirs. The second project is the construction of a complex for pumping quarry and drainage waters from the Internatsional underground mine in order to avoid penetration of mineralized water to the landscape and surface water. The company noted that underground waters from Metegero-Ichersky underground reservoir come back without harming the environment.

ALROSA has also moved forward on its decision to create its Single Environmental Centre, which unites and centralizes the environmental protection functions earlier vested in separate enterprises and divisions. The new unit will develop an environmental strategy for further integration into the overall development strategy of ALROSA. In 2017, the company also significantly expanded its monitoring program, as the company’s ecologists took about 1.5 thousand samples of water, air, soil and bed deposits. This helps ALROSA to become more transparent, to determine with more precision the degree of the industry’s impact on the environment and adjust its environmental policy.

“Protection of the environment is one of the most important areas of ALROSA’s work," said Polina Anisimova, Head of ALROSA Environmental Centre. "The Company’s task in this area consists not only in minimizing any impact on the nature but in helping to resolve the existing problems in the region of its presence. Simultaneously with nature protection actions, ALROSA implements a whole range of projects that will have a long-time effect. For example, it gradually transfers its machinery to gas fuel which is more environment friendly, or introduces energy saving technologies. Our aim is to preserve the nature and beauty of Yakutia for many years."

ALROSA in Top 5 of new “Polar Index”, a sustainability ranking for Russian companies operating in Arctic

Last week, ALROSA announced that it had placed among top 5 in the first “Polar Index” sustainability rating, which ranks Russian companies operating in Arctic. The rating was developed by the Project Office of Arctic Development and the environmental economics department of Faculty of Economics of the Lomonosov Moscow State University. The "Polar Index" is the first specialized rating of companies whose geography of activities affects the Arctic zone of Russia. The results of the first rating were presented in the Public Chamber of the Russian Federation on World Environment Day held on June 5. The methodology for calculating the rating is based on the theory of sustainable development, established under the guidance of the United Nations as a universal model of development – from individual territories and enterprises to the world as a whole. The rating takes into consideration a number of s ustainable developmentparameters, including its economic, environmental and social components.