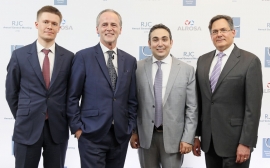 The Responsible Jewellery Council (RJC) has announced a series of senior appointments to its Board of Directors as the organisation continues to strengthen its position as the jewellery industry’s foremost standards setting and certification body. The appointments were announced at the RJC’s Annual General Meeting in Moscow on Thursday, 17 May.

The three newly appointed Officers of the Board of Directors are:

David Bouffard, Vice President of Signet Corporate Affairs, has been appointed the new RJC Chair. Over his extensive career, David has been responsible for developing and implementing longstanding and industry-leading sustainability and social responsibility initiatives. David has been the Chair of the RJC Communications Committee since 2015 and a member of the RJC Executive Committee since 2012. David previously served as Co-Chair of the Standards Committee from 2012 – 2014. “Having been a part of the RJC for the past six years I’ve seen the organisation grow and am extremely proud of what has been achieved. Our role is to ensure the highest possible standards of responsibility are met throughout the industry supply chain and in my new role as Chair, I will drive further improvements in the RJC’s influence in all global geographies, in all jewellery sectors, and to all stakeholders.”

Peter Karakchiev, Head of International Relations at ALROSA has been appointed Vice-Chair. Peter’s role at ALROSA, which he has held since 2013, puts him at the helm of a wide range of company’s international activities. He was elected to the RJC Board of Directors in November 2016 and in his new role will promote further development of RJC Standards, and their establishment as industry-wide best-practice.

Jason Rubin, President and CEO of the Republic Metals Corporation has been appointed as the RJC’s new Honorary Secretary. A precious metals refining expert with more than 20 years’ experience, Jason will be responsible for supporting the Chair and Vice-Chair with their duties as well as ensure the smooth running of the Board of Directors and Executive Commitee. A number of new Board members were also appointed to represent their respective area of expertise on the RJC's Board of Directors: Didier Backaert, Bonas & Co Ltd.; Rene Wiskemann, Allgemeine Gold- und Silberscheideanstalt AG; Giorgio Bodei, Pomellato SPA; Isabelle Poly, Piaget; Deborah Azar, Gemological Science International; and Stephane Fischler, IDMA.