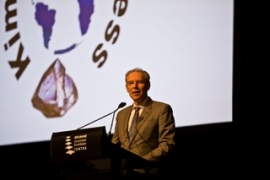 At the close of the KP Plenary session in Brisbane last week, the World Diamond Council (WDC) - the KP industry representatives focused on preventing conflict diamonds from entering the legitimate global supply chain and protecting the value of diamonds - extended praise and gratitude to Participants at the gathering, for embracing the spirit of collaboration and open dialogue around KP reform. “This week we spoke openly and transparently about areas of the KP in need of the most urgent reform, and I am pleased that we have come together and agreed about the way forward for us both as the Kimberley Process and as the diamond industry,” said Stephane Fischler, Acting President of the WDC. “Many important proposals have now been agreed to, and we salute the positive and constructive spirit present during this Plenary that has contributed to secure these outcomes.”

Mr. Fischler spoke about the need for the diamond community to unite, to collaborate, and to act. “I keep using the same words, as I believe them to be key to our common future, and I think we have made great strides in this regard this week,” he said. During the Plenary session, Participants had engaging discussions about expanding the meaning and scope of conflict diamonds. The WDC remained firm that all KP Participants must do what is necessary to expand its scope to secure better governance, and the security and development of stakeholders, so as to ensure consumer confidence in diamonds. A consensus was reached on the creation of an Ad Hoc Review and Reform Committee (AHCRR), an important commitment according to the WDC, as it gives the mandate to the KP to review and reform itself for the first time since its inception. This is a significant achievement to enhance the impact of the implementation of the KP on the Core Documents, and Fischler regards it as the WDC’s main achievement. “We have all agreed change is urgent and vital to meet consumer expectations and we look forward to the decisions made this week to be translated into meaningful progress,” added Mr. Fischler.

Despite the headline news that one the leaders of the Civil Society Coalition, IMPACT (formerly Partnership Africa Canada), would be withdrawing its participation in the KP, the WDC believes the KP is making genuine progress, even if the process is too slow for some of its members. The many Participants shared a vision for KPCS reform with the goal of making it a lasting reality and strengthening the KPCS minimum standards, by making the peer review mechanism stronger, but there was clearly disappointment about IMPACT's decision. “Disappointment is part of any process, but maintaining our commitment to progress is our duty. That is why we at WDC are saddened by IMPACT’s announcement today on their decision to leave the Civil Society Coalition (CSC), and therefore the KP family," Fischler added. "We will miss their individual contributions; however, we welcome the fact that IMPACT will continue engaging with industry on our common goal to protect the integrity of the diamond value chain.”

In his closing remarks, Mr. Fischler said, “While we are industry, more importantly, we also represent the voice of our consumers. The KP is the backbone of the industry. We are proud of what it has achieved and are looking forward to working closely with governments to strengthen the protection and support for those most at risk. This is essential to maintain and grow consumer confidence in the industry and allow us all to build a stronger story together.” After the closing session, Fischler said, "I strongly believe the WDC increased its credibility and strengthened its relations with KP Participants (i.e., the government members of the KP). We need to salute the very constructive attitude of, and between Russia, China, the EU and the US, as never before - all pushing in the same direction of strengthening of the KP. Our African colleagues themselves have taken the lead on some of the reform proposals as Working Group Chairs or as Participants, which has to be also saluted. It showcases the African diamond producing countries taking increased ownership of the KP. All in all, I’ve never seen a like-mindedness among the tripartite at a KP Plenary before."

Photo by David Williams of Gilimbaa