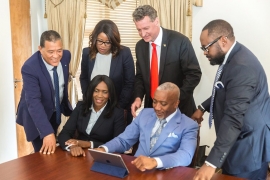 According to the Namibian, which reported on the accusations of continued underselling of Namibia's rough diamonds via Namdia to Dubai just two weeks ago, local, Namibian authorities last Wednesday blocked a Namdia shipment of rough diamonds worth US$10m. Industry sources say the state-owned Namdia, led by the infamous Kennedy Hamutenya, in conjunction with the Namibian Diamond Commissioner Auene-Gahutu, illegaly used sales invoices as valuation for the KP certificates, which instigated police officers to refuse to sign off on the consignments as they normally do before they are sealed and dispatched to the airport. Although insiders familiar with the matter say the issue was strangely settled just minutes later, with a signed KP certificate for the shipment(s), the matter points to increased pressure on Hamutenya and officials within the Namibian governement regarding the non-existent or intransparent valuation of Namdia's rough diamonds, which in turn allows opaque business deals with a handful of key figures and companies, such as Neil Haddock and SBMH Group in Dubai to continue.