Exceptional Blue Diamond to Yield a Million per Carat 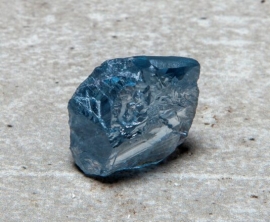 Earlier this year Petra Diamonds announced the recovery of a 39.34 carat Type IIb blue diamond from the Cullinan mine in South Africa. The diamond, known for its exceptional quality in terms of both its color and clarity, is currently in Antwerp for viewing, is expected to yield upwards of US$1 million per carat. Next week it will continue on its world tour till early July. Bidding will close on Monday, July 12.

In 2014, a blue 29.6-carat rough from the same mine was acquired by Cora International, a luxury jeweler, for US$25.6 million. Cora transformed the rough gem into a 12.03-carat internally flawless cushion-cut blue diamond, now known as The Blue Moon of Josephine. The stone was graded a “fancy vivid” blue in color and “internally flawless” in clarity. The polished gem, which was sold at a Sotheby’s auction in 2015 for US$48.5 million - more than US$4 million per carat - holds the world record price per carat ever paid for a diamond.

During the cutting process, The Blue Moon of Josephine lost nearly 60% of its mass. Experts believe that if the same were to happen to Petra’s diamond, the rough gem would be transformed into a polished 16-plus carat diamond. At US$4 million per carat, this would mean the diamond could rake in nearly US$64 million.

The Cullinan Mine is one of the world’s most prominent diamond mines, credited for producing seven out of fifty of the world’s largest rough diamonds (based on carat weight). These include the Centenary - ranked 25th, weighing 599 carats, discovered in 1986, The Golden Jubilee - ranked 13th, weighing 755 carats, discovered in 1985, and the most famed of them all, the 3,106-carat Cullinan Diamond, ranking as the first worldwide. The Cullinan Mine not only produces world-class white diamonds but is also considered the world’s most important source of blue diamonds.