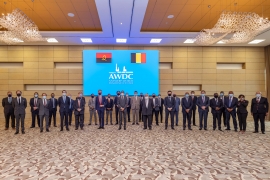 The Antwerp World Diamond Centre (AWDC) and the Belgian Embassy, supported by the Angolan Ministry of Minerals and Petroleum (MIREMPET), organized a 2-day visit to Angola, bringing the CEO's of 20 Antwerp diamond companies. The mission signals a renewed interest from both Antwerp and Angola to work together more closely. In a jointly organized session on Monday, with opening speeches by Minister Diamantino Azevedo, Belgian Ambassador Jozef Smets and AWDC President Chaim Pluczenik, the delegation was introduced to recent developments in the Angolan industry by representatives from state institutions Sodiam and Endiama.

Chaim Pluczenik, President of the Antwerp World Diamond Centre commented; “As the world’s largest and most transparent diamond trade hub, Antwerp is fully aligned with President Lourenço’s reforms to increase transparency but also to create added value for the diamond industry here in Angola.” According to the AWDC, 86% of the world’s rough diamonds are traded in Antwerp making the city the global leader in rough diamond trade. “Producers across the globe bring their rough diamonds to Antwerp first, because we can guarantee maximum revenue and true market value, yet barely 10% of Angola’s rough diamonds find their way to the Antwerp’s open market today. We are here to talk about how Antwerp can contribute and ensure Angola reaps the full benefits of this precious resource in full transparency, and what we can do to support Angola, by sharing our knowledge, expertise and network, to build a sustainable diamond industry from the huge potential it holds.”

In a packed program, the Antwerp delegation members met with the Honorable Minister for Mineral Resources, Azevedo as well as with Endiama and Sodiam Presidents Ganga Jr. and Bravo da Rosa and other Angolan industry stakeholders, engaging in one-on-one business meetings during formal and informal meetings throughout the two-day visit. On Tuesday morning, the delegation paid a visit to the Saurimo development site, where the government, together with Endiama, Sodiam and private stakeholders are building a diamond hub that focuses on training and education and local, sustainable beneficiation initiatives.