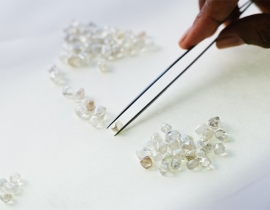 During the height of the pandemic, diamond producers faced stockpile build-ups when the world came to a standstill, stoking fears that gems amassed by miners could hurt the sector for years to come. In the ensuing months' excessive demand from manufacturers, traders, and jewelers have all but wiped out the stash. All this as demand for luxury sales, including diamond jewelry, jumped as consumers were unable to travel. Remarkably producers such as De Beers and Alrosa have since raised their prices for rough.

During the financial crisis in 2008-09 and again in 2013, rough stock rapidly grew, which subsequently meant polished inventory built up, putting pressure on the industry’s midstream. By significantly cutting down on production last year, miners were able to raise prices and were bolstered by renewed demand from both manufacturers and traders. De Beers prices are back to pre-covid levels, and its Q1 sales exceeded $1.6 billion in rough, the most since 2018. Meanwhile, for the same period, Alrosa's total rough and polished diamond sales accounted for US$1.16 billion.

As India faces a new wave of the virus, concerns are mounting that local production will not be able to meet demand from key Chinese and U.S. retailers, as some manufacturers have already been curtailed, according to people familiar with the matter. That could create shortages but may also cut rough-diamond demand.

While the speed of the stockpile reduction caught many by surprise, the big question is whether the industry will be disciplined enough not to sell too much too soon.