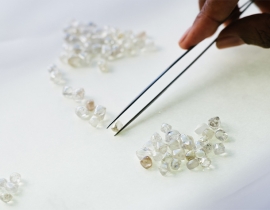 To enhance the use of data and ensure customers create value from the rough they buy, De Beers wants to introduce a tracking program for the diamonds it supplies to sightholders. In its new supply contract the company will ask manufacturers to share the outcome of the polished yield, reports Rapaport News. This would allow the miner to verify that the rough sold to manufacturers had been polished by them, rather than sold to a third party. Additionally, it would enable source verification and market intelligence.

The particulars are not yet clear, but sightholders believe they will be asked to share details on the sizes and qualities of the polished outcome. This is all part of the new three-year agreement that will run till December 2023. Reportedly fewer dealers will receive a direct supply, as the company wants as many clients as possible to process goods into marketable polished rather than “flipping” the rough.

The new contract continues the company’s focus on making the market more efficient and transparent, and on creating a collaborative relationship with sightholders, said Paul Rowley, De Beers’ executive vice president for diamond trading. To that end, De Beers will split sightholders into three categories — manufacturers, dealers, and retailers — and offer each group a bespoke selection of rough.

“It’s not about policing the system,” Rowley assured. “It’s about having a mature, healthy relationship. It’s not that we’re going to monitor every single polished stone that comes out of the box. This is a relationship that’s built on trust, as well.” While the previous contract focused on financial compliance, the diamond industry has improved in this area, and customers have generally succeeded in reducing their debts, Rowley pointed out. The new agreement has more of an emphasis on transparency, he said.