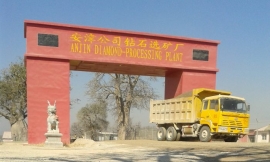 According to Zimbabwe Independent, Anjin Investments, has regained control of a diamond claim in Marange (Portal B), "in unclear circumstances", the news outlet claims in an extensive article. Anjin had to shut operations back in 2015 as the Mugabe administration forced the closure of seven mining companies and the subsequent merger of their assets into the Zimbabwe Consolidated Diamond Company (ZCDC). In March 2019, Zimbabwean media reported Anjin was supposed to resume mining in Zimbabwe at the Chiadzwa mining fields in Marange in May of that year. Anjin Investments has had a difficult history in Zimbabwe: in 2012, the US Office of Foreign Assets Control, which enforces economic, trade and financial restrictions, blocked Anjin’s US$200 million deal, prompting Anjin to find a way around the measures, which they did. This resulted in Anjin being accused of 'smuggling' the 3.7 million carats of diamonds involved to Shanghai, though the company says the shipments to China were government-sanctioned and worth $112 million rather than $200 million. Activists had also accused the company of various human-rights violations and evading payment of taxes and royalties. Anjin is a joint venture between a Chinese company, Anhui Foreign Economic Construction Co. Ltd., and Matt Bronze Enterprises, which was formed by the Zimbabwe Defense Ministry and the Zimbabwe Defense Forces through an intermediary company.