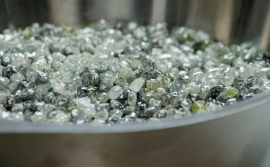 Mining Weekly reports that Mountain Province, owning a 49% stake in the NWT Gahcho Kue mine, has proposed a deal to Dunebridge Worldwide, an affiliate of shareholder Dermot Desmond, to sell its run-of-mine production, at current market prices at the moment of each sale. The first sale is scheduled for roughly US$22 million later this week. Mountain Province will be entitled to a certain portion of the potential added value - after fees and expenses - generated by Dunebridge when it sells the diamonds in the future. The deal, pending approval of the TSX, aims to get Mountain Province out of a difficult financial position, caused by the COVID-19 collapse of the market.