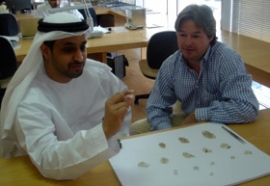 Namibia's Minister of Mines & Energy, Tom Alweendo, has blocked the extension of controversial middleman Neil Haddock, of Dubai based Global Diamond Tenders, who was appointed in 2016 to sell Namdia's diamonds. For years, Haddock and his company have allegedly been selling Zimbabwean and Namibian rough far below market value to Dubai companies. Namib Desert Diamonds (Namdia) is mandated to sell stones worth over an estimated US$150 million (N$2.1 billion) per year as stipulated by a 10-year agreement between De Beers and the Namibian government.

Namdia, led by CEO Kennedy Hamutenya, has been facing allegations of corruption and opaque dealings for several years now. Haddock's contract, which ended in September 2019, was already extended for a period of six months, but will not be reconfirmed by Minister of Public Enterprises, Leon Jooste. According to The Namibian's investigative journalism unit, it is unclear if the country has learned from past mistakes and places question marks on Haddock's replacement, Andries Eiseb, whom they say has business ties with Haddock. Until 2019, Eiseb's private diamond valuation firm, Global Diamond Valuators Namibia, was the official Government Diamond Valuator. That contract has since been awarded to an unknow company called Gem Diamonds Namibia.