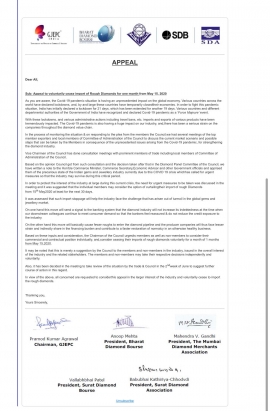 In a letter signed by GJEPC Chairman Agrawal, President of the Bharat Diamond Bourse Anoop Mehta and Marendra V Gandhi, President of the Mumbai Diamond Merchants Association, the industry organizations are calling on their members to implement a cessation of rough diamond imports for the duration of one month, starting May 15.

The letter reads "In the process of monitoring the situation & on responding to the plea from the members the Council, we had several meetings of the top member exporters and local members of Committee of Administration of the Council to discuss the current market scenario and possible steps that can be taken by the Members ... it was suggested that the individual members may consider the option of curtailing their import of rough diamonds from 15 May 2020 at least for the next 30 days. It was assessed that such import stoppage will help the industry face the challenge that has arisen out of turmoil in the global gems and jewellery market." The letter further mentions that the representatives reached out to government and a note was sent the India's Minister of Commerce and other government officials to inform them "that urgent measures need to be taken in order for the industry to survive."

While the letter states the call is "merely a suggestion," insiders believe many members of the Indian diamond industry will follow up on the suggested import ban. Some argue that a ban on imports is a stretch too far, saying miners have acted responsibly since the outbreak of the global pandemic. Russian miner Alrosa, for example, implemented increased flexibility to their long-term customers, allowing for 100% deferral of goods, while De Beers cancelled its April sight.

During the 2009 crisis, the GJEPC imposed a similar 30-day ban on rough imports.