Alrosa's Rough Sales in February Better Than Expected at $342M 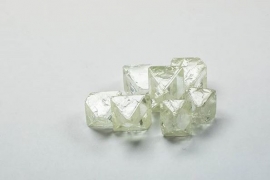 Russian diamond miner Alrosa earned less at its February rough sale than in January but defied expectations somewhat by limiting the damage despite the nervousness pervading the indsutry. The miner's February rough diamond sales totaled $342.3 million, representing a 12% decline from January sales of $390.2 million and no change (+0.5%) from February 2019. Total sales for the month fell 14% to $346.4 million from $405 million last month due to a 74% decline in polished diamond sales, which fell to $4.1 million from $14.8 million in January. Polished diamond sales fell 18% from the $5 million sold in February last year.

"The uncertainty with the spread of COVID19 virus started to weigh on negatively on the demand and customers’ activity, the factor that will be impacting demand in the coming months," said Evgeny Agureev, Deputy CEO of Alrosa. "However, we continue to pursue a 'price-over-volume' strategy to keep prices stable rather than increasing sales volumes."  The miner has already adopted a policy to provide flexibility to its clients, reducing the obligation to purchase to 55% of their contracted volumes. It remains to be seen whether Alrosa will provdie still greater flexibility should the impact of the coronavirus continue in the months ahead.