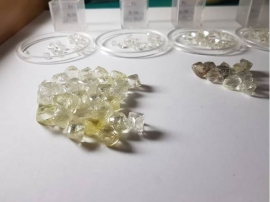 Russian diamond miner Alrosa has published its financial results for 2019, and while the totality is not pretty, there was reason for optimism to close out the year. As expected, Alrosa’s performance in 2019 was subject to pressure from external factors, and while the miner took steps to respond accordingly, it could not prevent its profit from falling 31% for the year, to 90.4 billion rubles ($1.26 billion) to 62.7 billion rubles ($876 million). For the full details, click 'Read the full article'.

Alrosa's volume of sales during the year fell 12% y-o-y to 33.4 million carats from 38.1 million carats a year ago, while 2019 revenue declined 26% to $3.27 billion from $4.41 billion. Not only did the volume of sales fall, the greatest demand was for smaller stones. Including polished diamond sales, revenue was $3.34 billion. In Q4, however, a 28% increase in carat volume (8.2 Mct) led to a revenue increase of 48% ($888 m) compared to the prior quarter, and an 8% rise compared to Q4 2018, due to improved demand from manufacturers and destocking at the midstream and retail levels. This upturn seemed to indicate that the market was gradually regaining its balance – though it would turn out to be short-lived due to the COVID-19 outbreak in January.

Alrosa attributed the 2019 fall in the volume of sales in part due to its ‘price over volume’ approach. The miner is wary of reducing the price of rough diamonds too much so as to avoid setting off a chain reaction that leads to a decline in polished prices, which would put additional pressure on those companies already holding large inventories of polished goods. High inventory levels were one reason for the declining demand for rough diamonds during the year. As Alexey Philippovskiy, ALROSA’s CFO explained, the excessive inventory build-up at the beginning of 2019 was driven by overly optimistic expectations following high demand in 2017/2018. Further, they saw weaker demand from India’s midstream due to tightening of borrowing terms for manufacturers.

To address these market challenges, Alrosa introduced a number of initiatives aimed at maximizing its free cash flow, such as the ‘price over the volume’ mentioned above. To provide flexibility to the manufacturers, Alrosa also adjusted the minimum contract allocation level, decreasing it from 80% to 55%, which was designed to help the industry destock. According to Alrosa's figures, the Indian midstream sector destocked by lowering rough diamond imports by 20%.

At the production level, Alrosa opted for prudent supply side management by reducing output at the highest cost/low margin mines and scaled down its investment program. Nonetheless, Alrosa's 2019 output increased by 5% to 38.5 m cts as the company was ramping up newly launched facilities and increasing productivity at existing assets. The miner has lowered its 2020 production guidance from 38.7 million carats to 34.2 million carats. The company also reduced its Capex in 2019, which dropped from $404 million to $279 million; expectations for 2020 have fallen from $363m to $307m.

“The diamond industry came out of 2018/2019 crisis year healthier,” the company says, “with balanced stocks, disciplined supply management across the chain, and a more financially sustainable mid-stream segment. However, in the short-term certain headwinds, which are exogenous to the industry such as COVID-19 outbreak, could decelerate demand recovery, which started to materialize in the second half of 2019.” They concluded that “The management’s outlook for the diamond industry remains optimistic in the mid- to long-term, which is supported by expanding demand fueled by the expanding middle class, continued growth of disposable income and tightening supply.”