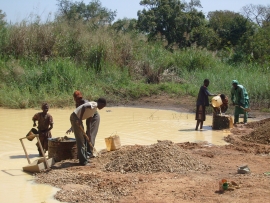 Russia's Deputy Finance Minister Alexei Moiseev, the 2020 Kimberley Process (KP) Chair, has stated that Russia will work to lift restrictions on the export of diamonds from the Central African Republic (CAR), according to Reuters. A total ban on diamond exports from CAR was imposed in 2013 but partially lifted in 2016, allowing CAR to resume sales of diamonds from five 'green zones' where the government could certify the stones were conflict-free. The partial lifting of the ban, however, has not significantly increased CAR's legal trade in rough diamonds. KP Chair wants a 'road map', the EU and the NGOs want guarantees. This could prove to be another contentious year for the consensus-strapped organization (all KP decisions require a consensus vote), which did not succeed in expanding the definition of 'conflict diamonds' last year.

In December 2019, Moiseev stated that CAR should be granted a '"road map” outlining the steps it needs to take to get the suspension of diamond sales lifted. He told Bloomberg at the time, “We need to ensure that illicitly traded diamonds move to the legal marketplace, bringing income for people and taxes for the state. The situation in CAR isn’t getting any better, and we can’t delay this any more.” Moiseev has said that the current restrictions had not reduced CAR’s total output of diamonds; it has just increased the amount of diamonds sold illegally and generating profits for middlemen rather than local communities. “That’s not what we want,” Moiseev said. Therefore, Russia will focus on helping the CAR government to improve its regulation of local diamond production with the aim of re-entering the export market. Moiseev is cited as saying that Russia may play a role in monitoring the situation on the ground as well, should it be invited by Kimberley Process members to do so, though he added that African countries should lead the way.

CAR last year stated its intentions to clean up its own house. In October 2019, the government launched what it called a "full overhaul of the country’s alluvial diamond mining sector. Going forward," it reads, the government "will stand for a bold new and drastic approach where full transparency and proper due diligence protocols, traceability of individual parcels and OECD Due Diligence Guidance will be crucial." The statement adds, "The country direly needs diamond production to return to the formal market." In 2012, prior to the ban, CAR's total production was about 300,000 carats, or $62 million, falling to $2.3 milion in 2018 despite the partial lifting of the ban. President Faustin Archange-Touadéra signed a decree in September 2019 stating that "all existing buying houses can participate in demonstrating their capability to formalize exports and [intention] to withdraw from any engagement in the informal circuit." It obliged each buying house to export at least $3 million per quarter, failing which there would be a withdrawal of the license.

At the KP Plenary Meeting in New Delhi last November, member states agreed to restructure the Operational Framework System (OFS) created for the CAR while maintaining the current strict monitoring of exports. It granted the CAR government the right to issue certificates for the export of rough diamonds from the green zones. Previously, the precious stones could be exported only after approval from the KP's CAR Monitoring Team. The Russian Finance Ministry called this a “first step” toward the legalization of CAR diamonds, and it was agreed as a provisional modification valid for one year, with an assessment by the KP during 2020.

Under the new policy, government-sanctioned authorities were tasked with the responsibility of supplying confirmations of imports of rough diamonds from the CAR, but members of the trade were urged to practice enhanced vigilance when handling rough diamonds believed to have originated from the country by ensuring that import shipments from CAR only include goods that have been sourced from the approved green zones. The European Union at the time said it would not support the lifting of the restrictions without a “convincing” indication, including by United Nations experts, that gems are mined in conflict-free zones and that the CAR authorities can guarantee full control over exports, as they were tasked to do.