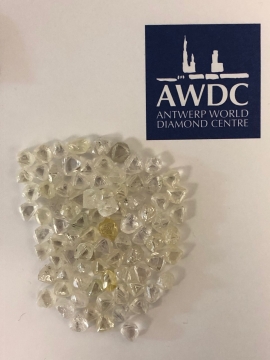 Antwerp’s rough-diamond trade put a weak October performance in the rear-view mirror in November, as the volume of rough exports in particular rose sharply despite another decline in the average price per carat, according to figures from the Antwerp World Diamond Centre (AWDC). The polished-diamond sector remained more sluggish than usual in what has been a modest month for trade over the past several years.

November exports of rough diamonds reached a higher volume than in the comparable month in 2018, increasing 8% to 10.6 million carats. The volume increase only yielded a 1% rise in value to $849 million due to a decline in the average price per carat to $80 from $85. The average price/carat for rough exports for the year to date currently sits at $89 per carat, which is 15% lower than in 2018 ($105/ct). However, the volume of carats exported in November was 84% higher than in October. It was the second time in three months that rough exports have exceeded the levels reached in the comparable months last year, with November and September achieving the highest level of trade in rough diamonds so far in 2019.

November’s rough-diamond imports declined 8% in volume on a year-over-year basis and fell 7% in value, as the average price remained essentially unchanged at $106 per carat. Notably, the $106 per ct achieved is 3% higher than the average price per carat for the year to date ($103/ct), which still lags 14% behind prices a year ago. Here as well, the volume of rough imports strongly outpaced those in October, gaining 40% from last month. For the year to date, the volume of Antwerp’s rough-diamond imports and exports have fallen by 14%, with the value of imports down 26% at $7.3 billion and that of exports down 28% at $8.2 billion, as compared to last year.

The volume of Antwerp’s polished-diamond trade fell considerably in November compared to last year, and compared to the last two months, which easily offset a modest increase in the average prices of goods traded. Imports of polished diamonds declined 27% in volume as well as value, as the average price per carat imported only gained 0.6% to $1,827, which is 8% off the pace for the year to date ($1,979 per carat). For the year to date, Antwerp’s polished-diamond imports are down 11% in volume and value as prices have remained flat.

Antwerp’s polished-diamond exports also slid considerably during the month, losing 22% of value on a 23% decline in volume. The average price per carat was 1.4% higher than in November 2018 at $2,267 per carat, falling short of the $2,449 per carat earned for the year to date – which is still a percentage point ahead of last year. For the year to date, Antwerp’s polished-diamond exports have lost nearly 13% in value and just over 13% in volume. Polished imports and exports currently sit at $9.5 billion and $9.3 billion respectively, both just over a billion shy of the first eleven months of 2018.

Image: Rough diamonds at November tender of 350,000 carats of DRC goods at AWDC