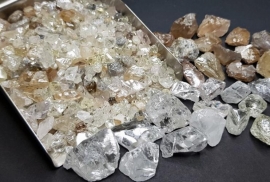 Despite the concerted efforts of the Angolan government to bolster its rough diamond trade, the challenging market has led to less postive results this year than hoped for. According to the Ministry of Finance (Minfin), Angola exported 706,900 carats of rough diamonds in October, a decrease of 8.3 percent compared to September, reports Macauhub. Since the beginning of the year, the country has exported 7.12 million carats, which is 11.4% fewer than in the same period last year. The fall in volume, however, has been somewhat compensated with the higher average export price, which has increased by 4.2% year-on-year, leading to export earnings being just 7.7 percent lower in 2019 compared to the same period in 2018.

In terms of diamond tax revenue, the government raised about US$75.5 million in the first 10 months of the year, a year-on-year decrease of 1.3% The second international diamond auction organised by state-owned diamond trading company Sodiam will take place until 5 December. This auction will have five lots of diamonds, coming from the Cuango Mining Society and the Catoca Mining Society. The first international auction featuriung goods from Lucapa Diamond Co. yielded US$16.7 million to Sodiam.

The Angolan mining industry has been undergoing substantial changes, namely in licenses and registration. As reported earlier, Lucapa is in advanced discussions with the Angolan Ministry of Mineral Resources and Petroleum and Angola’s national diamond company, Endiama, to potentially secure a majority stake in the Lulo Project joint venture, which holds the primary (kimberlite) exploration licence for the 3,000km2 Lulo diamond concession in Angola. Lucapa currently holds a 39% interest in Project Lulo and is the operator of the kimberlite exploration joint venture, with remaining shares held by Endiama (51%) and Rosas & Petalas (10%).  Discussions are expected to be concluded in the first quarter of 2020.