Mountain Province Has a Challenging Q3, Ends in Net Loss 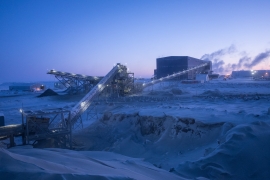 The difficulties facing diamond miners delivering products at the lower end of the market hit Mountain Province Diamonds (MPD) particularly hard in Q3 (the three months ending Sept. 30), though the miner has been struggling with low prices for some time now. Q3 revenue from sales declined by 26% as the average price per carat fell by 28%. The company attributes a downturn in carats recovered, as well as the low prices achieved, to mining activity in a lower grade and quality areas that delivered "the expected poorer product mix", as well as "challenging" market conditions.

"2019 was always going to be a difficult year in the Life of Mine Plan due to the fact that we were largely mining the lower grade and quality areas,” said Stuart Brown, Mountain Province President and CEO. He said the company was nevertheless confident going into Q4 2019 and was increasing its full year processing guidance to 3.3 – 3.4 million tonnes processed from 3.2 – 3.3 million tonnes, while narrowing its full year 2019 production guidance from 6.6 – 6.9 million carats to 6.7 – 6.8 million carats (100% basis). MPD is a 49% participant with De Beers Canada in the Gahcho Kué diamond mine located in Canada's Northwest Territories.

MPD's production results have suffered from lower grade ore and fewer carats recovered, though they have mined 32 million total tonnes of ore so far in 2019, which is 7% higher than the same period last year. Total carats recovered fell 10% and the ore grade was 17% lower than the same period last year, slightly below expectations. They point out that "The shortfall in higher grade and quality ore tonnes mined for the year will be recovered in 2019, with the ability to feed the plant with higher grade ore." MPD clarifies that lower grades were expected in 2019 primarily due to mine sequencing and ongoing plant modifications, but weather and equipment-related delays limited access to higher grade ore blocks and put additional pressure on grade performance.