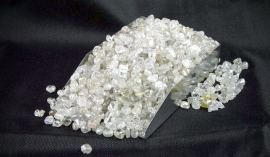 The Angolan National Diamond Trading Company (Sodiam) has reported an increase in revenues from the sale of rough diamonds  during Q3 2019, driven by a significant increase in the volume of carats sold as the average price per carat fell.

According to figures released on Monday in Luanda, Angola earned US$295 million in Q3 2019 from the sale of 2.28 million carats, an increase of 12% or US$30.7 million compared to the same period of 2018, when the country earned $264 million from the sale of 1.5 million carats. The significant increase in the volume of carats sold during Q3 was somewhat mitigated by an 18.5% decline in the average price per carat, which fell to $137 from $167 a year ago. The country also sold 1.5 million carats in the previous quarter (Q2 2019), earning $233 million at an average price of $155 per carat.

According to Angolan news outlet Prensa Latina, the Angolan diamond industry reported an increase of 9.3% in sales for the year to date (Jan. - Sept.) compared to the same period last year, executives reported on Monday. Meanwhile, revenues rose 6.5% in the same period, according to Gaspar Sermao, national diamond market and trade promotion director at the Ministry of Mineral Resources and Oil's (MIREMPET). Sales in the first nine months of 2019 exceeded 6.4 million carats, at an average price per unit of 139 dollars, achieving gross revenues of more than $897 million. Angola earned approximately $145 per carat for their diamonds in 2018.

The presentation of the report to national and international media took place at the MIREMPET headquarters, with the participation of State Secretary for Geology and Mines Janio da Rosa Correa Victor, and top executives from the main sector companies.