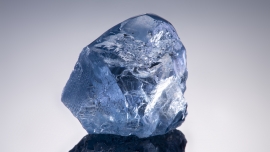 Petra Diamonds will hold a special tender of the 20.08-carat blue diamond the miner recovered from the Cullinan mine in South Africa last month, with analysts speculating it fetch as much as $15 million. The stone is a gem-quality Type llb diamond.

“We expect this stone to fetch a good price - we are hoping for at least $13 million to $15 million - despite the rough market’s well-publicized travails,” said Yuen Low of Shore Capital in a note Monday. “If this proves the case, it should provide a welcome, significant boost to [Petra’s fiscal-year] 2020 profits.” Another estimate, this time by Investment bank Berenberg, valued the “exceptional” blue gem quality diamond at between $10 and $15 million, based on prices Petra has achieved for similar roughs from Cullinan in previous years.

Back in 2014, Petra recovered an 'exceptional' 122.52-carat blue diamond called "The Cullinan Dream", which the miner sold for $27.6 million, or $225,269 per carat. Only months before that, Petra sold a 29.6-carat blue stone from the Cullinan mine for the remarkable sum of $25.6 miilion or $862,780.38 per carat. After cutting and polishing, it was unveiled as the ‘Blue Moon’, a 12-carat cushion-cut Fancy Vivid blue Internally Flawless diamond. In November 2015, the stone was sold at a Sotheby’s auction in Geneva for $48.5 million (over $4 million per carat), representing at the time a world record price per carat for any diamond. Other notable diamonds the mine has yielded in recent years include a 25.5 carat blue diamond, which was sold in May 2013 for $16.9 million (or $663,114 per carat), and a diamond found in 2008, known as the Star of Josephine, which was sold for $9.49 million, or $1.35 million per carat, which at the time was the world record price per carat achieved for any gemstone at auction.

Viewings will take place at Petra’s diamond marketing offices in Johannesburg from November 1-7 and at the Diamond and Exchange and Export Center from November 8-15. London Stock Exchange-listed Petra recently announced a 6-percent drop in its full-year revenue for 2019.