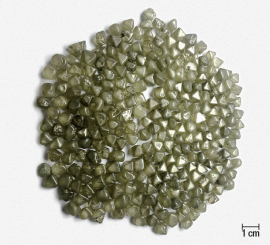 The Minerals Marketing Corporation of Zimbabwe (MMCZ) says it will conduct another diamond auction before the end of the year, and is aiming to sell between 400,000 and 500,000 carats. Two weeks ago, the MMCZ conducted its third auction this year, where they auctioned 316,000 carats and attracted 25 companies from around the world.

The value of the previous sale has yet to be released, but if one reads between the lines of the comment by MMCZ general manager Tongai Muzenda - who said the MMCZ anticipates better returns in the short-term based on the expectation of improved market prices - the prior sale must have disappointed. “We are looking forward to conducting another diamond auction where we are targeting to sell between 400,000 and 500,000 carats by the end of November,” he said.

The country expects to produce 4.1 million carats of diamonds this year, up from 2.8 million carats last year. At the peak of production in 2012, Zimbabwe’s output was 12 million carats. Zimbabwe currently has only two diamond producers - Murowa and the State-owned Zimbabwe Consolidated Diamond Company (ZCDC), which was formed in March 2016 after government evicted all diamond mining firms in the Chiadzwa fields following the expiry of their licences. Earlier this year, the ZCDC reached an agreement with Russian miner Alrosa to develop diamond deposits in the country. The joint venture gives Alrosa a 70% controlling stake for the development of greenfield projects in the Manicaland region, with a provision for possible expansion to whole country, according to their agreement.

At the time, Information Minister Monica Mutsvangwa saidthat although efforts will be made to ensure a much favourable parity between Alrosa and ZCDC, the structure will be in favor of the Russian firm. Alrosa CEO Sergey Ivanov said his company will invest an initial $12m in the venture.