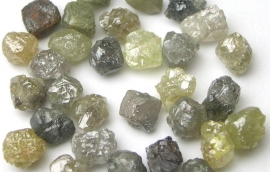 The Minerals Marketing Corporation of Zimbabwe (MMCZ) says the country’s third diamond auction for this year, which closed last week, attracted 25 companies from around the world. The tender of 316,000 carats opened on September 9. MMCZ general manager Tongai Muzenda said “We had invited 28 companies for this third diamond auction and three did not come, and this means we attracted 25 companies." The results of the tender are not yet avaiable, with Muzenda saying they are currently working on the bids made by the prospective buyers.

The diamonds were produced by State-owned Zimbabwe Consolidated Diamond Company (ZCDC) with the auction attracting prospective buyers from Belgium, Dubai, India, Israel and South Africa. The MMCZ invited seven international diamond buyers last June to participate in a private sale of about 2 million carats. This came after the country had postponed the sale of diamonds as authorities wanted to understand processes and procedures involved in diamond marketing. Zimbabwe expects to produce 4,1 million carats of diamonds this year up from 2,8 carats last year. At the peak of production in 2012, Zimbabwe’s production was 12 million carats.

Private sales are the new model Zimbabwe is using since the consolidation of the diamond industry. Under the private sale system, selected buyers are invited for valuations of diamond parcels available for sale. The price that the buyer offers is then compared with the valuations that would have been made by the producer. If there is a variance in what the producer is asking for and what the buyer is prepared to pay, the parties negotiate. If the parties fail to agree on price, the parcel will be rolled over and other buyers will be invited. Previously, the sale of diamonds was only done through scheduled auctions where buyers were publicly invited.