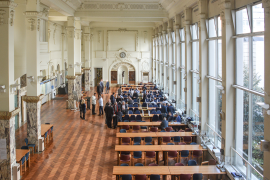 The global diamond industry in the first half of 2019 faced a variety of well-doucmented challenges leading to declining commerce across all segments of the trade. The industry-wide recession showed little signs of improvement over the summer, with the major miners recording their lowest sales figures in years and manufacturing in India slowing significantly. Situated at the heart of the global diamond trade, Antwerp is directly impacted by industry developments. As the first-half malaise continued unabated in July and August, Antwerp’s diamond imports and exports continued to face strong headwinds.

The most notable trend in August was the sharp year-over-year decline in diamond prices - rough as well as polished - while the volume of imports and exports remained mostly steady. The deterioration of polished prices in July and August is of particular note as Antwerp had to this point defied the global trend; the average price of polished-diamond exports and imports for the year to date have actually shown a 4% increase. The average price per carat of polished-diamond exports through August currently sits at $2,518 (up from $2,412 in 2018), with the volume of exports declining 11%, such that the total value of polished exports for the year has fallen 7.5% to $7.1 billion.

In August, however, the average price per exported carat fell 25% to $1,890 after declining to $2,033 in July. An 11% decline in the volume of exports in August led to a 34% total decline for the month. The volume of polished-diamond imports actually increased by one percent in August, but a nearly 20% drop in the average price per carat led to 19% decline in overall value. For the year to date, Antwerp’s polished imports are down 5% at $7.4 billion.

The slowdown in the rough-diamond trade abated in August after a significant decline in July; while the volume of rough-diamond imports and exports were equivalent to August 2018 (5 million carats imported, 4.7 million exported), the average price per carat continued to tumble. The average price of rough imports fell 27% to $93 per carat, well below the $106 per carat average price for the year to date - which is down from $121 per carat last year - bringing the overall value of rough imports down 27% with it, to $461 million in the traditionally slow month. The average price of rough exports crashed to $69 per carat, a 33% drop from August 2018 and well off the pace of $92 per carat for the year ($105/ct in 2018). The value of exports for the month fell 33% along with the prices to $323 million.

For the year to date, the price of rough goods travelling through Antwerp has fallen 12%. Combined with a 19% decline in the volume of rough-diamond imports, the value of the rough-import trade is down 28% to $5.4 billion. A 20% decline in the volume of rough-diamond exports for the year has the value of exports down 30% to $6 billion. The nervousness of Antwerp traders as we approach the critical holiday season has become palpable, but most believe long-term that the industry will recover and is likely to emerge leaner and more streamlined.