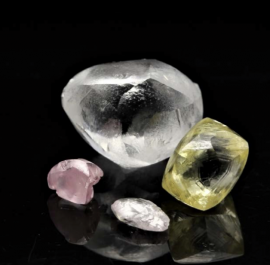 Lucapa Diamond Company, which operates high-value mines in Lesotho (Mothae) and Angola (Lulo), saw its first half 2019 net profit after tax jump to US$1.1 million compared with a US$4.3m loss during the same period last year as an increase in production led to higher sales, complemented by a massive jump in the average price per carat sold. Their combined rough sales rose by 85% to US$29.4 million from US$15.9 million a year ago.

Sales of diamonds from their Lulo mine were responsible for the bulk of their earnings, driven by their inaugural international tender organised by Sodiam in Luanda at the end of January. The seven large, top-quality Lulo diamonds tendered in Angola weighed 498 carats and achieved total highest bids of US$16.7m (A$22.9m). Payment for one of the seven diamonds – the 46 carat pink – was not received within the terms of the tender and SML is reviewing cutting & polishing options for this exceptional stone to maximise revenues. A second sale during the June half pushed total sales from Lulo to US$22.1m at an exceptional average price per carat of $3,668, more than double the average price of $1,642 achieved last year.

Lucapa commenced commercial production at the Mothae mine at the beginning of the year and its results include post-production revenue recognised from the first two tenders completed in Antwerp of US$5.8m. The first two tenders of rough Mothae diamonds (5,411 carats and 7,008 carats) that took place in Antwerp during the June half generated gross proceeds of US$7.3m (A$10.5m). This represented an average overall price of US$588 per carat for the entire run of mine production or US$729 per carat for diamonds in the +11 sieve size fraction. The highest price per carat achieved for an individual Mothae diamond in the two tenders was US$36,664. Mothae had 3,855 carats in inventory at the end of the June half. Three further sales of Mothae diamonds are planned for H2.

Production at Lulo during the June half declined by 24% to 7,236 carats as mining took place "predominantly in areas which, while producing lower grades and volumes, delivered higher value diamonds." Lulo's output included 216 diamonds larger than 4.8 carats, with the largest two diamonds weighing 130 carats and 128 carats – bringing to 13 the total number of +100 carat diamonds recovered from Lulo up until the end of the June half. Other recoveries of note included a 7.5 carat fancy purple pink gem. The miner says that diamond recoveries are expected to improve in H2 following the move ares that are expected to produce higher average grades than those achieved during this half. The expect production volumes to be significantly boosted by the arrival of a new fleet of Volvo and Caterpillar earthmoving equipment, comprising six excavators, eight trucks and three bulldozers. The new fleet is part of the SML-funded US$12m expansion of alluvial mining operations aimed at increasing annualised throughput to 450,000 bulk cubic metres.

Despite the decline in prodcution volumes at Lulo, Lucapa's total production increased to 20,504 carats from 9,566 carats as Mothae’s output (13,267 carats) was 36% higher than the company had expected in the first half "due to the efficiency of the new plant and better than planned recovered grades from weathered material of 2.42 carats per 100 tonnes - 25% higher than plan." Mothae yielded a total of 229 +4.8 carat diamonds in the first half., including five +50 carat stones, the largest being a gem-quality 126 carat diamond. Production also included rare Type IIa, Type IIb, fancy pink and yellow diamonds. Additionally, Lucapa repored a 90% increase in in-situ carats in their updated JORC alluvial diamond resource. "Significantly," they note, "the 90% increase to 80,400 in-situ resource carats in the updated Lulo Diamond Resource came after 19 months of mining depletion to 31 December 2018, during which time >30,000 carats of diamonds were recovered and sold for ~US$62m. In addition, the average US$ per carat value for Lulo diamonds modelled by Z Star in the updated Lulo Diamond Resource of US$1,420 per carat was up 17% on the previous modelled estimate. The updated total of in-situ carats equates to more than four times SML’s calendar 2018 production of 19,196 carats."