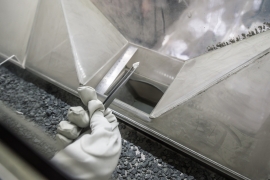 Replicating the first-half results of 2018 was always going to be a challenge for Gem Diamonds, and against that high bar the miner came up short in H1 2019. Whereas the Letšeng mine in Lesotho produced 10 diamonds weighing more than 100 carats in H1 2018 - including the 910-carat Lesotho Legend which sold for $40 million - the miner only recovered three diamonds greater than 100 carats during H1 2019, along with a 13.33-carat pink diamond that they sold to Graff on tender in Antwerp for $8,750,360. The price for that stone set a new high on a dollar per carat basis for a Letšeng diamond, at $656,933.

Prices for the smaller and commercial goods have been under pressure for some time with the larger goods having been less affected, the miner notes, although the market for larger goods has also shown signs of weakness recently. Yet despite their overall figures trending down, with fewer large recoveries and a weak market, the company and investors are not expressing pessimism. Firstly, Gem recovered another two large, high-quality stones just after the reporting period - white stones weighing 140 and 123.5 carats - and they were mining in a lower-value area of the Letšeng mine. In line their previously provided guidance, the limited contribution from the high-value Satellite pipe ore during H1 2019 resulted in a lower grade recovered compared to H2 2018. This, together with lower volumes treated, resulted in lower carats recovered.

"As guided previously," said CEO Clifford Elphick, "mining during the Period occurred in the lower-value part of the orebodies, and notwithstanding this, achieved prices were 10% higher than the previous period. As planned, mining has commenced in the higher-value parts of the orebodies in H2 2019 and we anticipate that production guidance previously provided to the market will be achieved for the year." Production at Letšeng fell 8% to 56,668 carats.

Gem Diamonds completed the construction of its pilot plant - ‘detecting diamonds within kimberlite’ - which aims to identify diamonds in kimberlite prior to reaching the crushing phase, thereby avoiding breakage of larger stones. Commissioning and ramp-up commenced in August. The company also entered into an agreement with Pro Civil (Pty) Ltd to sell its Ghaghoo mine in Botswana for $5.4 million. It expects to complete the sale in the second half of 2019.