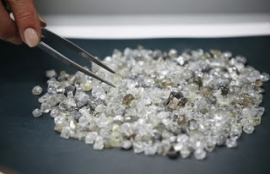 Impacted by the persistent slump in the global rough diamond market, which has yet to show any signs of abating, Russian diamond giant Alrosa has reported a sharp decline in Q2 and first half 2019 profits and revenues, adjusting its anticipated sales for the year 2019 downward by 13-16% to 32-33 million carats from their anticipated 38 million carats, the miner announced on Monday.

Second-quarter revenue year-over-year fell by 21% to RUB 57.4 billion ($859.7 million) which the company attributed to lower sales (down 8% y-o-y) and changes in the sales mix, namely, a 24% decline in gem-quality diamonds sales compared to Q1 (down 5% y-o-y) due to "excessive stocks of rough and polished diamonds in the mid-stream." They also noted they earned softer prices on a like-for-like basis (-4.5%), mainly due to lower demand from the mid-stream and limited access to affordable financing for mid-stream in India. The average price of gem-quality rough slid 21% to $130 per carat.

“The diamond market continued to be affected by a number of negative factors that had first emerged as early as the second half of the previous year," said Alexey Philippovskiy, ALROSA’s Deputy CEO. "These include a slowdown in jewelry sales following a strong performance of 2017–2018, particularly as a result of global macroeconomic uncertainties amidst escalating trade wars. As an additional factor, the mid-stream and retailers have elevated inventories, while India's cutting and polishing business continues facing difficulties in securing affordable financing."

Alrosa repeated its message from earlier months that it anticipates the diamond market will gradually return to a balance as the supply-demand dynamic from jewelry consumers remains stable, which bodes well for renewed activity and higher demand for rough diamonds closer to the end of Q3 2019 in the run-up to 2019-2020 Christmas sales season. However, to realize these hopeful expectations it will still have to overcome the key driver of the current decline in demand, namely, global macroeconomic uncertainty due to escalating trade tensions between US and China and the depreciation of Chinese yuan against US dollar, resulting in lower purchasing power of Chinese consumers and tourists.

For the full Q2 and H1 results, click here.