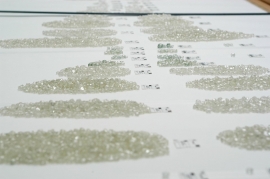 De Beers today announced that its sales of rough diamonds at its sixth 'sight' of the year in July earned a total of $250 million, a 53% decline from the $533 million sold in July 2018. It is the smallest amount earned from a sale since December 2015, as the miner gave its clients the opportunity to buy fewer goods without repercussion - an uncommon though not unprecedented move. De Beers CEO Bruce Cleaver says this flexibility is part of their effort to work with its clients to help them ride out the storm currently raging in the rough diamond market.

"With ongoing macroeconomic uncertainty, retailers managing inventory levels, and polished diamond inventories in the midstream continuing to be higher than normal, De Beers Group provided customers with additional flexibility to defer some of their rough diamond allocations to later in the year," CEO Cleaver said in a statement. "As a result, we saw a reduction in sales during the sixth cycle of 2019." De Beers has cut its second-half production targets, he notes, lowering its production forecast to 31 million carats for this year, compared with an earlier outlook of 31 million to 33 million carats. The company also plans to boost its marketing spend significantly this year. And, as De Beers CFO Nimesh Patel told Rapaport News, in addition to lowering production and raising purchasing flexibility, De Beers has lowered prices, "so we’ve injected profitability back into goods." Here is where many on the inside would disagree.

In yesterday's article for Bloomberg, Thomas Biesheuvel noted that, "For the 80-some buyers operating from Belgium to Israel to India, the profit margins on trading diamonds have turned wafer thin or disappeared altogether. Many frustrated sightholders are refusing to buy at current prices, according to people familiar with the matter." Someone who is familiar with that matter, David Harari of Bluedax, an online rough diamond trading platform providing dealers and manufacturers access to rough boxes, titled his blog about the latest sight "Rough Trade Slumps as Prices Continue High". He writes, "Levels of rough trade have hit rock bottom and everyone believes prices should go down." He says De Beers' move to let clients defer purchases "is a bid to maintain a stable market and to avoid prices crashing," but he wonders how long they can continue doing so.

"This month," he writes, "some boxes in the secondary market were sold with discounts of 3% and 4% from the list price. This resulted in losses of 7% on the total cost price, so it’s hardly surprising the banks no longer want to finance these kinds of purchases." The latter remark refers to a letter sent by major diamond financing bank ABN Amro stating they would no longer finance unprofitable purchases of rough diamonds, yet most people acknowledge there is currently a very limited range of stones that are profitable to manufacture right now - mostly better-quality diamonds above 0.5 cts. The bank also said that clients wanting rough financing need to apply on a case-by-case basis, which means ABN Amro will be looking at the profitability of each purchase. This is problematic because the lack of liquidity has forced people to sell at a loss just to recuperate their investment, but selling at a loss in turn cuts off their liquidity from ABN Amro, forcing them to find other sources of funding.

Despite all of the 'short-term' crisis talk and tumbling rough sales, however, representatives of De Beers express confidence this situation will not last. If it is indeed a matter of stock levels, then when the excess of polished goods eventually moves through the system, manufacturers will again buy rough. At least that is the theory, and consumer trends back up this expectation as U.S. consumer confidence remains high and Chinese and Indian demand continues to grow. Some are less certain, however, that the industry will gain steam along with demand: “It’s a perfect storm: you have too much supply, not enough demand,” said Richard Hatch, a metals and mining analyst at Berenberg. “I can’t see it improving anytime soon.” But for now, De Beers is keeping its chin up: “I’m not going to pretend it’s easy, because it’s not right now,” CEO Cleaver told Rob Bates. “The midstream is being buffeted by a series of things that is making it tough for them. There is an oversupply of polished in the midstream, less restocking ... I don’t want to underestimate how difficult it is in the midstream right now, but there is a psychological element to this,” he says. “If we get a good season, this will pass.”