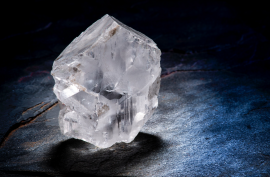 Petra Diamonds reported full-year revenue below analysts’ estimates on Monday and said it expects next year’s production to be slightly lower, as it struggles with a diamond market hit by weak demand and lack of easy credit. The London-based miner with operations in South Africa and Tanzania said that revenue decreased 6% to US$463.6 million (FY 2018: US$495.3 million) for the year ended 30 June 2019, reflecting a weaker diamond market. Petra's average diamond selling prices also declined by approximately 5% per carat (to $124/ct) in line with market movement during the period, the miner explained, “Polished diamond demand and prices were weaker as the market was challenged by higher than normal polished inventories and tightening cutting-centre bank credit.”

Petra said it expects full year 2020 diamond output of about 3.8 million carats compared with 3.9 million carats produced this year, and cut its capital expenditure target for next year to $43 million. Run-of-mine (ROM) production is expected to remain largely flat at 3.75 Mcts (FY 2019: 3.76 Mcts), but output from their tailings are expected to decrease to 0.05 Mcts (FY 2019: 0.11 Mcts). They said the relatively small contribution of surface tailings from Finsch and Cullinan is mainly due to resource depletion, while tailings production at their famous Cullinan mine will be curtailed to ca. 0.1 Mcts for FY 2020 due to weak pricing especially evident in smaller size ranges. ROM production will come from the newly established underground block cave and sub-level caves at Cullinan, Finsch and Koffiefontein as well as surface ROM production from the Williamson open pit and the Finsch overburden ROM stockpiles.

Petra, which has been trying to reduce debt while delivering free cash flow, said it is targeting $150 million (120 million pounds) to $200 million (160 million pounds) of free cash flow over the next three years. "The focus in the short term is on driving efficiencies across the business through Project 2022 to provide a stable, consistent operating platform off which to drive improvements, supported by an appropriate organisational structure and cost base to enhance our cash flow generation and significantly reduce our net debt," said Petra CEO Richard Duffy.