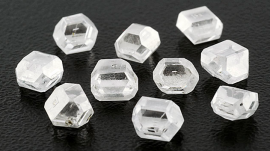 India has introduced a specific, 8-digit HS (Harmonized System) code for synthetic rough diamonds in an attempt to maintain the integrity of the diamond pipeline, an issue for which the Indian diamond industry has been subject to criticism in recent years. The Gem & Jewellery Export Promotion Council (GJEPC) has said this amendment introduced in the Finance Bill comes as a big boost to the efforts of the Indian diamond industry to keep the pipelines for natural and synthetic diamonds separate and to ensure that any attempt at mixing is easily detected and appropriate action is taken.

The new amendment splits the previous six-digit Indian Trade Clarification (ITC) code - which covered all synthetic rough gemstones - into two categories: one for diamonds; the other for non-diamond gemstones. Henceforth, it proposes, all rough (unworked or simply sawn or roughly shaped) laboratory-grown diamonds (laboratory-created or manmade or cultured or synthetic diamonds) will be covered by HS Code 7104.20.10, while all other synthetic gemstones in the same categories will come under the separate HS Code 7104.20.90. India already has separate codes for polished goods: Synthetic diamonds are identified under ITC code 7104.90.10, while other polished synthetic gemstones are identified with code number 7104.90.90.

The Chairman of the GJEPC Pramod Kumar Agrawal said, “This will go a long way in strengthening the efforts of the Council to monitor the two pipelines and maintain their integrity.” A few weeks ago, speaking on behalf of the Indian diamond industry at the KP Intersessional meet in Mumbai, Sanjay Shah of the GJEPC said, “Council has proposed that the government should expand the HS Codes beyond the existing ones for polished synthetic diamonds (recently implemented in India) to cover trade in rough synthetic diamonds and even synthetics studded in jewelry and other items”.

The latest move will also complement the global industry’s efforts to ensure that distinct HS Codes for synthetic rough and polished becomes a global norm, the GJEPC says. China has already put in place separate HS Codes and from January 1, 2020 the EU will be implementing a separate 8-digit CN code for synthetic diamonds at Customs. The Eurasian Economic Union, including Russia, introduced new national codes for rough (unworked) and cut (worked) synthetic diamonds and other synthetic gemstones last February. At the Kimberley Process 2017 Plenary in Brisbane, the Working Group of Diamond Experts introduced an initiative to formally introduce into the KP the World Customs Organization’s (WCO) Harmonised Commodity Description and Coding System (HS Code) tariff nomenclature, which includes 6-digit subheadings for synthetic diamonds (7104.20 for rough and 7104.90 for polished). It was agreed that all countries should take the necessary steps to enable the introduction of the HS Codes for synthetic diamonds applicable across all customs zones around the world by January 2022.