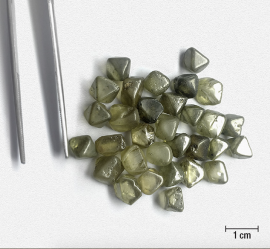 Seattle-based online jewelry retailer Blue Nile, which cleared about $500 million in revenue last year, has place an embargo on Zimbabwean diamonds over reports of human rights abuses in the Marange district, several Zimbabwe news outlets are reporting. It is unclear when Blue Nile introduced this stance, which is detailed in its Ethical Sourcing policy on the company website, but recent attention has been focused on the country as a coalition of civic organisations is lobbying for the blacklisting of locally produced diamonds citing growing human rights violations on unregistered artisanal miners.

Blue Nile's sourcing policy reads, "Blue Nile, along with the global diamond industry, has a zero-tolerance policy toward conflict diamonds," citing its strict adherence to the Kimberley Process. "All Blue Nile diamonds are warranted to be conflict free. If one of our suppliers was ever found to be in violation of that process, we would immediately sever that relationship." In a separate segment concerning 'Concerning Zimbabwe Diamonds', Blue Nile says it "is committed to ensuring that the highest ethical standards are observed when sourcing our diamonds and jewelry. Because of the reported human rights abuses in Zimbabwe's Marange diamond district, Blue Nile will not purchase or offer diamonds from that area. As a responsible member of the diamond and jewelry industry, we are working with our suppliers to ensure our consumers receive only the finest goods procured from ethical sources.

According to Business Times Zimbabwe, the move by Blue Nile also comes after an illegal diamond miner last month was shot dead by a ZCDC security guard on May 15 when more than 300 illegal diamond panners flooded an area in the Marange diamond fields. The newspaper says that local diamond and extractive industries as well as environment watchdog Center for Natural Resource Governance (CNRG) said the blacklisting was welcome. CNRG executive director Farai Maguwu said, “We endorse the decision by Blue Nile. It is the right thing to do. The human rights abuses are ongoing in the Marange diamond fields and it’s shocking that nothing tangible is being done to address that. What needs to be done to address issues in Marange is not even difficult. ZCDC just needs to arrest people rather than shoot them,” Maguwu said.” Maguwu added that the move by Blue Nile was going to have a massive impact on the growth prospects of the local diamond sector, as other US jewelers would likely follow to avoid negative associations with Zimbabwe stones. The CNRG also appealed to the UN last April to classify Zimbabwean stones as 'blood diamonds'. Tiffany’s said at the time that it will not buy diamonds from Zimbabwe.