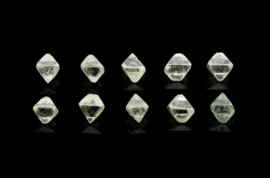 AGD Diamonds notes in a statement that the demand for diamonds from the Grib Diamond Mine remains stable despite the restructuring of the banking system in India, restrictions on lending to the cutting industry and the overall decline in sales from the dominant producers such as Alrosa and De Beers. They attribute their strong sales to well-structured spot sales strategies and first-class rough product preparation while sorting in compliance with a unique corporate classifier that meets the most advanced standards of marketing technologies.

One June 12, 2019, on Russia Day, AGD celebrated the landmark 20 millionth carat of diamond mined at Grib. The previous anniversary milestone - the 15-millionth carat - was achieved in May 2018. In the first five months of 2019, AGD Diamonds mined 1,340,000 tons of ore. AGD sells all of the diamonds mined at Grib Diamond Field through auctions held on the web-based platform in Antwerp, with the exception of 5% remaining in Russia (for sale through Almazyuvelirexport, a state-owned company). Grib Diamonds holds 10 auctions each year for the sale of regular assortments of rough and two auctions for special sizes (10.8 carats and above), which are held in Russia in accordance with the law. The Grib Diamond Mine is said to be the fourth largest in Russia and the eighth in the world, with an estimated mine life of 15 years.