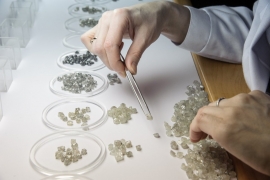 “In the first months of 2019, the global diamond market saw a somewhat weaker demand from cutters and polishers due to both diamond stock normalization as mid-streamers in India continue to experience difficulties with access to affordable financing, and inherent cyclicality of the market," said Evgeny Agureev, Member of the Management Board, Director of the United Sales Organization at Alrosa. "The Company maintains a moderately positive outlook for the foreseeable future, expecting the market situation to improve in the second half of the year.”