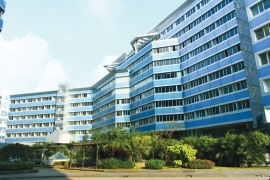 India's rough diamond imports continued its first quarter recession in March, signalling a slowdown in manufacturing amid a tightening of available financing; polished exports also declined for the third consecutive month. Rough diamond imports fell by 16% in value during the month to $1.4 billion on a more than 9% decline in the volume of rough imports, and their value has declined by 24% during Q1.

These declines are in keeping with output and sales figures from the major diamond producers: according to De Beers official figures, the miner's rough diamond output fell by 8% in Q1, while sales fell 15% to 7.5 million carats from two sales cycle in first quarter of 2019; Alrosa's Q1 sales tumbled by 38% to $988 million from $1.61 billion during the first three months of 2018, outpacing the 21% decline in the volume of carats sold. According to Rapaport News calculations, combined rough sales by De Beers and Alrosa dropped 19% by volume and an estimated 30% by value in the first quarter. "Mining companies are planning to reduce supply, with global production down approximately 6% during the period." For the fiscal year (April '18 - March '19), the volume of India's rough imports has declined by 10% while their value has fallen by 17%.

India's polished diamond exports also fell by 8% to $1.86 billion in March despite a much larger, 16% decline in the volume of polished stones exported. The dip in quantity was mitigated by a 10% rise in the average price per carat exported to $791. For the calandar year to date (Q1) India's polished exports are down by 9% year-over-year at $5.95 billion, a figure propped up by an 8% increase in the average price per carat of those exports, at $807 per carat. While the year-over-year decline during (calandar) Q1 would seem to be bad news, it nevertheless represents a 15% increase over the $5.18 billion exported in Q4 2018. For the fiscal year (April 2018 - March 2019), while the volume of polished diamond exports have declined by 13%, the value of those exports remained steady (-0.39%) compared to the previous year at 23.8 billion.

India's polished diamond imports during the month of March declined 43% y-o-y to $110 million and have fallen by 40% to $290 million in Q1. The country's rough diamond exports, however, increased by 42% in March to $199 million and have risen by 19% to $425 million in Q1. All figures are courtesy of the Gem & Jewellery Export Promotion Council (GJEPC).