Alrosa's Q1 Production and Sales Decline from 2018, Launches New Mine 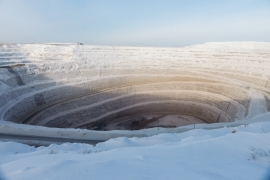 Alrosa's rough diamond production in Q1 2019 declined significantly from the same period in 2018, as did its sales, impacted by a sharp decline in prices and a larger share of small-size diamonds in the sales mix and lower prices mostly for medium-size diamonds. Production as well as sales, however, have increased in comparison to the previous quarter, as demand for small- and medium-size rough diamonds gradually revived across Q1 2019 as dealers and retailers were restocking their supplies after the holiday season, despite the diamond market performing weaker than usual for that part of the year due to lower jewelry sales during the Christmas season.

Following the launch operations at the Verkhne-Munskoye deposit, Alrosa has now launched diamond production at the Zarya pipe, Aikhal Mining and Processing Division. The new deposit's expected life exceeds ten years. In 2021, based on the projected roadmap, the enterprise is to reach the design capacity of 1.25 million tons of ore per year. It estimated total diamond resources at the deposit to be 3.5 million carats, valued at US$1 billion. The company says the massive investment needed to develop the deposit was made more appealing by the fact that it does not require construction of a new mining and processing division and a plant, as the Zarya pipe is located 3 km from Aikhal Mining and Processing Division. "It is a landmark event for both ALROSA and our country," said CEO Sergey Ivanov. "It is already the second deposit launched in Yakutia in such a short span of time, which demonstrates mineral wealth of our homeland and enormous potential of our company."