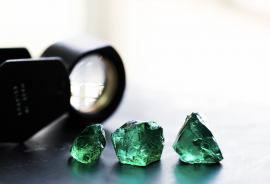 Gemfields reported a $60.4 million net loss for 2018, compared with a $45.1 million profit in 2017, despite achieving record revenues for the year of US$206 million. The company attributed the loss to the impact of a new tax regime in Zambia and and a costly court case that ended in a settlement. Gemfields' share price endured a disappointing 12 months, falling 40% by year-end.

In Gemfields' first full fiscal year since the July 2017 takeover by its biggest investor, Pallinghurst, the group saw record revenue of $206.1 million, a 252% increase over 2017, and crossing the US$200 million threshold for the first time, the miner noted. EBITDA also increased, from $30.5 million to $58.9 million. The company noted that operations in Mozambique (ruby and corundum mining activities) and Zambia (emerald and beryl mining activities) generated revenues of US$127.1 million and US$60.3 million, respectively, in different market circumstances. The miner said the ruby auctions achieved record results, while the emerald market continued to suffer from a combination of deflating property prices in Jaipur, tight liquidity, and heightened regulatory scrutiny in India following the Nirav Modi scandal. Most of Gemfields’ emerald customers operate in India.

The government of Zambia effected changes to the tax regime on 1 January 2019, introducing a new 15% export tax on precious gemstones and metals. Combined with the existing 6% mineral royalty levied on gemstones, this increases total tax on revenues at the company's Kagem emerald mine to 21%. In addition, the mineral royalty is no longer tax-deductible for corporation tax purposes. Gemfields agreed to pay $7.6 million on a no-admission-of-liability basis to settle the lawsuit regarding a human-rights-abuse case brought against the company: Leigh Day represented 273 Mozambicans who allege that they, or their relatives, were the victims of  serious human rights abuses at or around Montepuez Ruby Mining Limitada’s (MRM’s) mine in northern Mozambique (a joint venture in which Gemfields is the majority stakeholder). Gemfields also said they face considerable challenges in Mozambique and Zambia as well as Ethiopia - where a mob overran the site in June 2018 and a month later looted the site. Its 110-person team there has been reduced to a handful, the company said, as it works to find a way to restart bulk sampling.