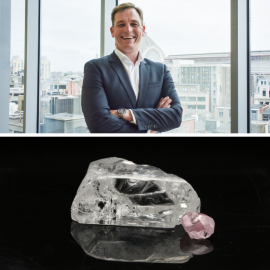 Australian diamond miner Lucapa has reached two milestones in the space of a month: first, the inaugural international tender of Angolan diamonds offered for sale via a competitive tender under the new diamond marketing policy enacted by the Angolan President, Joao Lourenco, and the maiden tender of goods from the Mothae mine in Lesotho held at Bonas tender house in Antwerp which concluded this week. In Angola, Lucapa Diamond Co. sold seven large, top-quality diamonds from the Lulo alluvial mining project, weighing 498 carats and earning $16.7 million at an average price of US$33,530 per carat. The tender at Bonas in Antwerp totalled 5,411 carats sold for a total of $3.8 million at an overall average price per carat of $707. The Diamond Loupe caught up with Lucapa CEO and Managing Director Stephen Wetherall for quck discussion of these two milestones.

The Diamond Loupe: The expectation surrounding the first open international tender in Angola was that it would generate higher prices than when companies were required to sell directly to Sodiam. Did you achieve this goal?

Stephen Wetherall: The tendering of the diamonds in Angola generated higher prices for Lulo for the 7 diamonds offered on tender. The tender or auction methodology for the sale of diamonds is designed to promote competition for product and achieve highest market price on the day. This competition was absent under the old diamond marketing policy. As a result of this new competition, from 31 buyers who participated in the tender, a significant premium was achieved over the prices that would have been achieved under the previous methodology.

TDL: Were there any specific surprises either in terms of higher value achieved or the amount of bidding activity, or was it about what you expected?

SW: Given that is was the first time such a tender was run in Angola, we did not set unrealistic expectations. We were very happy with the interest shown by the market, the level of bidding and the final outcome of the tender. As noted above, we achieved a large premium to the prices that would have been achieved previously. What was very evident was the large interest from diamantaires to access new sources of production, and we received many more requests to participate during and post the event. This bodes well for the next tender event.

TDL: Did the tender run smoothly?

SW: We must remember, it was the very first tender to be conducted in Angola, and while there are some areas that will no doubt be addressed ahead of the next event, by most measures it was a very successful tender.

TDL: Last week you completed your first run-of-mine tender in Antwerp for production from the Mothae mine in Lesotho. What was the makeup of the sale? (see Mothae diamonds at Antwerp tender here, here, here and here).

SW: The first run of mine parcel contained diamonds from our ramp up phase to 31 December 2018 and largely, the first month of production. Whilst this parcel had no stand-out large high-value diamonds, we had 20 single lots containing Specials, fancy coloured diamonds and select >10.8ct white diamonds as well, a large portion of them being Type IIa’s. The remainder of the parcel was split into quite usual market assortments for a parcel of this size.

TDL: What was the market response to these goods?

SW: We were very happy with the market response to this new production. Bonas had 110 companies participate in the tender with 69% of the lots being won by new winners (compared to the bulk sample sale last year).

TDL: Can you derive from this sale that the market for larger, higher-quality goods is still robust?

SW: Absolutely. A number of indicators point to that. If you look at the number of viewings per parcel, there was clearly more attention given to the diamonds that were individually presented as single-stone lots. You would know that single-stone lots are generally reserved for a premium product. Secondly, the prices achieved on the higher quality and better color diamonds were strong, notwithstanding market conditions at present. Lastly, as mentioned above, with 69% new winners, that is evidence that competition for high-value product remains robust.

TDL: Has the latest result from drilling at the Brooking project caused you to shift your focus more toward value generation from your operational projects and place less emphasis on exploration in Australia?

SW: The latest results were not the reason Lucapa is shifting focus and while the results from one target (Little Spring Creek) did not produce economic grades from sampling, the other micro-diamond and indicator mineral recoveries and targets at the Brooking tenement still remain of high interest to us for identifying a lamproite source.

The main reason for the current shift in focus on production is as a result of the current macro-economic environment affecting investor sentiment. Creating shareholder value remains a key objective for the company, and in this climate where investor sentiment towards green field exploration in the diamond sector is at a low, good progress on these assets is going unrewarded. Investors in this climate are looking to more stable, producing and cash flow generating companies for investment. As such, to keep shareholder value creation at the forefront, we have to adjust our development strategy and we are reviewing our work programs on these early exploration assets.

Round rough
Read the full article