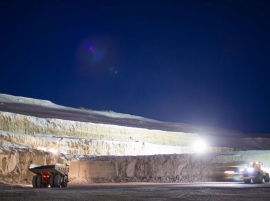 De Beers reported a 4% rise in total revenue for FY 2018, reaching $6.1 billion, but its earnings slid by 13% to $1.25 billion driven by expenditures such as the $87 million acquisition of Peregrine Diamonds and the launch of Lightbox Jewelry. Rough diamond sales rose by 4% to $5.4 billion (2017: $5.2 billion), driven by improved overall consumer demand for diamond jewelry and a 1% increase in the average rough diamond price index. The average realised price increased by 6% to $171 per carat from $162 per carat, reflecting the lower proportion of lower value rough diamonds being sold in the second half. The soft market for smaller stones resulted in a 2% decline in consolidated sales volumes to 31.7 million carats.

De Beers notes that preliminary data for 2018 indicates an improvement in global consumer demand for diamond jewelry, in US dollar terms. Benefiting from this trend, the miner says its revenue was bolstered due to improved ‘high end’ jewelry sales at De Beers Jewellers, although this was partly offset by a 5% decrease in Element Six revenue due to a reduction in sales to the oil and gas market (Element Six provides synthetic diamonds for the industrial market). However, they said there were a number of "headwinds" that impacted consumer confidence, including the US-China trade dispute. While global growth during the first half of the year was driven by solid US and Chinese consumer demand, in the second half, while the US maintained its growth rate, Chinese demand slowed, with trade tensions leading to slower economic growth and stock market volatility.

Singing a tune that has become very familiar, the miner explains that in the second half, the low-priced product segment of rough diamonds came under considerable pressure due to weak demand and surplus availability, the rapid depreciation of the rupee and a reduction in bank financing in the midstream. Overall, rough diamond production increased by 6% to 35.3 million carats from 33.5m carats, which was in the lower half of the production guidance range of 35-36 million carats. Canada saw the biggest jump in production, jumping 19% to 4.5 million carats. Production in Botswana (+6%) and Namibia (+11%) also performed well, but rough output in South Africa fell 10% to 4.7 million carats owing to a period of suspended production at Venetia following a fatal incident, as well as lower run-of-mine ore grades experienced as the mine approaches the end of the open pit.

The company reports that capital expenditure rose 53% to $417 million from $273 million last year, which represented the company's lowest Capex in the last five years. About 60% of the increase is attributable to the acquisition of Peregrine, but also to new projects such as their synthetic diamond project Lightbox, their asset-tracking blockchain pilot Tracr and a their pilot to create a secure and transparent route to market for ethically-sourced artisanal and small-scale mined (ASM) diamonds, called Gemfair. De Beers says they also increased their marketing spend (proprietary and category) to $166 million, the highest amount in a decade, and incurred typical expenditures on exploration and evaluation in Canada. The company also reports that it made good progress on projects to expand their production capacity, including continued work on transforming our Venetia Mine in South Africa into an underground operation.