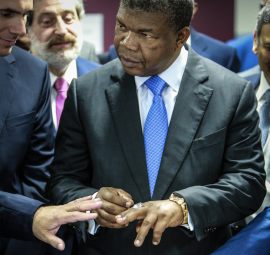 Angolan president Joao Lourenço came into power about 18 months ago, stating his intention to fully reform the country's diamond industry, and his progress has been undeniable. Starting with untangling the country from the business interests of his predecessor’s family - president Jose Eduardo dos Santos and his daughter Isabel dos Santos - he set out to increase transparency and promote the country ́s image abroad in order to facilitate the exportation of goods and services and attract direct foreign investment. Lucapa Diamond Co. at the end of January held the first international tender under the new diamond marketing policy, marking the beginning of a new era for the Angolan diamond mining industry.

The key to reforming the diamond industry in Angola was to end the state-owned firm Sodiam's monopoly on the sale of diamonds. On an exploratory visit to Antwerp, Lourenço said he had instructed Endiama (diamond exploration, mining and licensing) and Sodiam (diamond purchasing, sales, trade management and marketing) to change their policies to benefit the country and private companies, and he formally ended Sodiam's grip on the trade on January 31, at the time of the Lucapa sale. Previously, all diamonds were sold to Sodiam, which would then sell them to selected buyers at a discount to market prices - denying the country valuable revenue. Today, miners can sell up to 60% of their production to whoever pays the best price.

Africa Mining Intelligence says Russia's Alrosa, which holds 41% of the Catoca diamond mine, recently sold diamonds for over $130 per carat. Before the reform, Sodiam would have sold them to preferred buyers such as Victoria Holding - an entity controlled by Isabel dos Santos - for $90 per carat. The Lucapa tender attracted 31 companies from eight countries: Angola, Belgium, United Arab Emirates, India, United States of America, South Africa, Israel and China, including heavyweight firms such as Belgium's Rosy Blue, Diarough, Samir Gems and Arslanian, India's Kapu Gems and Julius Klein Group from the U.S. At the tender, a 46.77-carat stone was purchased for over $4.6 million, or $98,910 per carat, with another going for $3.5 million and three others earning over $2 million.

Africa Mining Intelligence says further reform is needed to convince more mining firms to invest in Angola, but they are waiting for the state to approve a law enabling private firms to hold a majority share in a project, as well as receiving guarantees for foreign currency repatriation of funds held in Angola. On February 12, Angola opened a new, $5 million diamond and special stone cutting plant created via a partnership between private investors (90%) and Sodiam (10%). The plant will initially process three to ten carat diamonds and special stones, with the first year of operation covering two thousand carats of stones on monthly basis. Angolans will represent the majority of the workforce, under the company’s policy.