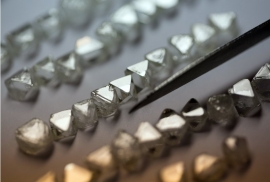 Russia's Alrosa, the world’s largest diamond miner, could not escape the current trend on the rough diamond market at the start of 2019, as its rough diamond sales plunged by 44% to $278 million from $499 million in January 2018. This is in sharp contrast to December sales, however, when rough sales increased by 46% over the previous year. Polished-diamond sales in January were $3.4 million, bringing total sales for the month to $281.5 million.

“In January, market activity was lower than usual," said Yury Okoemov, ALROSA Deputy CEO. "After active restocking at the midstream in December 2018 (our December sales were up 20% qoq and up 46% yoy), our January sales came lower." He points out that while the combined sales during December and January were lower than December 2017/January 2018, the decline was not so steep, at 17%, and represented an 11% improvement over December 2016/2017. "Sales in the diamond market are always cyclical," he added, "and apparently, we are seeing the expected correction after the peak values in previous periods.”

Alrosa was not alone in experiencing a slow market in January, as De Beers rough sales in Cycle 1 were much lower than the two previous starts to the year - the $505 million in Cycle 1 good for a 25% decline from January 2018 ($672 m) and a 30% decline from January 2017 ($720 m). Like Alrosa, De Beers' December 2018 sales were higher than usual, and even higher even than this January sight. Reports from around the industry suggest that manufacturers are carrying high inventory levels, with the rise in rough imports in 2017 and again 2018 following increased rough production, rather than rising demand.