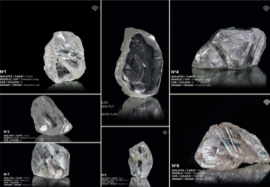 The sale marked the beginning of a new era for the Angolan diamond mining industry, being the first Angolan production offered for sale via competitive tender under the new diamond marketing policy enacted by the Angolan President, His Excellency Joao Lourenco. The new diamond marketing policy is among the measures being introduced by President Lourenco, with the express aim of increasing foreign direct investment into Angola’s diamond sector. Diamond miners say they have struggled to make money in Angola owing to a marketing system that obliged them to sell at below international prices. The new plan will set the price of rough diamonds against an international benchmark and give producers greater influence to pick their own buyers. Officials have noted that the state will raise 7.5% of the auctioned amount (5% in royalties and 2.5% for the anticipated industrial tax).

Lucapa CEO/MD Stephen Wetherall previously said he is delighted that the Lulo tender would be the first conducted under Angola’s new marketing policy. “Lucapa and its partners are extremely excited and proud that diamonds from our Lulo mine have been selected to start a new chapter in Angola’s diamond mining history.” The sale brought total sales of Lulo diamonds to date to US$141 million at an average price per carat of US$2,105.