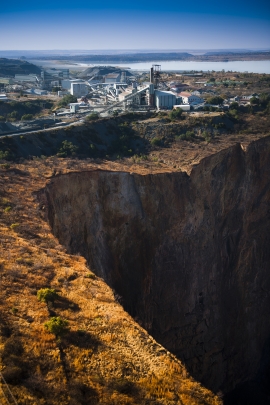 South Africa-focused miner Petra Diamonds has seen its shares tumble 27% since Monday's announcement of its H1 2019 results, despite an 8% increase in sales and a 10% rise in production.  The culprit? Near-historical low prices earned from its rough diamonds from its flagship Cullinan mine. Prices achieved from the miner's Cullinan goods slumped 31% compared to last year, earning just $96 per carat, and compared to a nine-year average of $140 per carat from 2009 to 2018, the miner said.

Petra's sales during the half of $207.1 million derived from a 15% increase in sales volumes to 1,736,357 carats. While the overall revenue seems encouraging, rough diamond prices on a like-for-like basis also fell by approximately 4% compared to the previous half. The miner attributes this to "usual seasonal weakness", but observers say it is as part of a larger industry downturn in demand for cheaper and smaller production. There is simply too much of it on the market and the midstream - the traders and manufacturers that buy it - are struggling to make a profit.

Another positive from H1 is that production increased by 10% to 2,019,147 carats (H1 FY 2018: 1,843,956 carats) as Petra continued to ramp up output at a new portion of the Cullinan mine. The miner also maintained its full-year production guidance of approximately 3.8 – 4.0 million carats, down from 4.6 million carats of output last year. Petra's net debt increased to $557.2 million (30 June 2018: $520.7 million and 30 September 2018: $538.9 million) as its positive operational cash flow for the period was offset by $21.2 million of advances to Black economic empowerment (BEE) partners, $8.6 million funding advanced to the Kimberley Ekapa Mining Joint Venture (recoverable during H2 FY 2019), and $25 million revenue shortfall due to the volatility in Cullinan’s product mix, a 4% downward movement in like-for-like pricing and the disruptions Koffiefontein asset.

Analyst Thomas Biesheuvel of Bloomberg aptly describes Petra's situation as follows: "Petra has been seeking to turn around its fortunes after piling up debt to expand its flagship Cullinan mine in South Africa. It was forced to tap shareholders for funds last year to alleviate those problems, but the company’s efforts are being undermined by falling diamond prices and its recovery of too many low-quality stones." As for the disappointing prices from Cullinan? "That situation may continue," according to RBC Capital Markets. “We see a concern that despite ramping volumes, prices are not following, indicating the ‘base’ level of pricing may be structurally lower than previously anticipated,” the bank said.

Image: The Cullinan mine in South Africa, Petra Diamonds