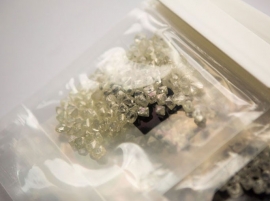 De Beers' first sight of the year provided no indication that the sluggishness of the market for lower value rough is ready to subside. The January sight is typically one of the largest of the year, as manufacturers restock after the Christmas season in preparation for the holidays ahead, including Chinese New Year and Valentine's Day. De Beers rough sales in Cycle 1, however, were much lower than the two previous starts to the year. The miner announced 2019 first cycle sales of $505 million (provisionally), a 25% decline from January 2018 ($672 m) and a 30% decline from January 2017 ($720 m). The company points out that December 2018 sales of $544 million were higher than usual, and even higher even than this January sight, which is very uncommon. The strength of the December sale, however - 19% higher than the year before - was in part influenced by Sightholders buying goods that were deferred earlier in the year.

In what has become typically terse commentary on the the results of each sales cycle, Bruce Cleaver, CEO, De Beers Group, said: "Rough diamond sales during the first sales cycle of 2019 were lower than those for the equivalent period last year, reflecting higher than normal sales in the previous cycle (cycle 10 2018) and the slow movement of lower value rough diamonds through the pipeline." Reports from around the industry suggest that manufacturers are carrying high inventory levels, with the rise in rough imports in 2017 and again 2018 following increased rough production, rather than rising demand. The midstream (traders and manufacurers) is currently swallowing that rough, as polished exports are not increasing at same rate as rough imports, leading to the question of whether the market can continue to digest all the goods entering the market.

The question becomes particularly relevant with concerns about consumer confidence falling at the start of 2019. Holiday diamond jewerly sales from the major retailers was not exactly robust, and in the US, the Christmas holiday was welcomed by what would become the longest government shutdown in history (35 days), with around 800,000 consumers missing consecutive paychecks. Moreover, the reopening the government may be temporary, with a February 15 deadline for a resolution to the issue that triggered it in the first place. Additionally, the interest rate had edged higher and the stock market underwent a massive correction to stock market, making consumers feel less confident about spending. Chinese jewelers have raised their inventory levels, which means they will not be looking for diamonds on the market as energetically as usual. Bellwether retailers Chow Tai Fook and Luk Fook both saw a palpable slowdown in same store sales in the past quarter.